In April 2013 we were approached by Susan Rosenild working at the department of nature and public health of the Vordingborg Municipality in Denmark. Her department was interested in the possibility of translating FoAM's opensource foraging app into Danish to use it for school classes and citizens, who prefer Danish language. Together we translated all the species of plants and other wildfood sources in the app and the user interface. 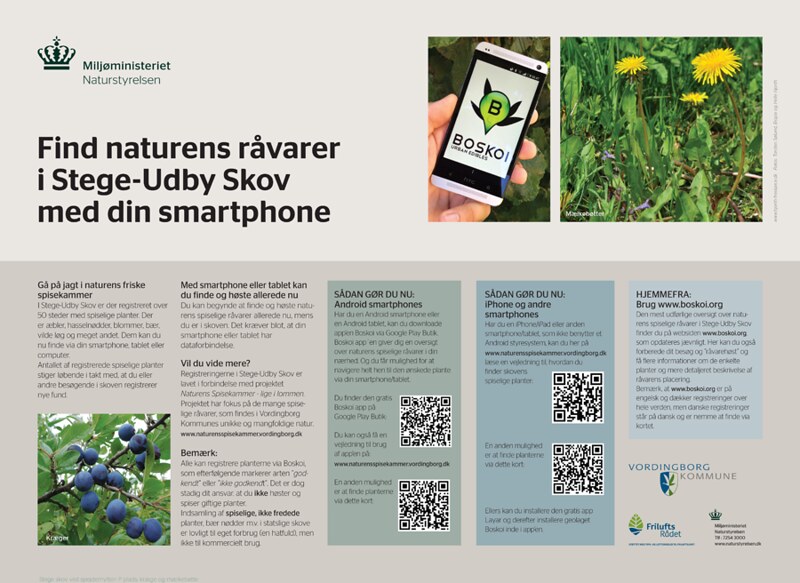 In sept 2014 there was a public launch with lots of school children harvesting lots of berries and nuts: www.naturensspisekammer.vordingborg.dk

Soon new reports and requests for species started coming in from Denmark, like Lepidium latifolium or 'Strandkarse' in Danish, also know apparently as 'the Wasabi of the North'. With the help of Susanne we gave all items their correct names in Danish, English, Dutch and of course Latin. Through the program we had over 200 installs in Denmark. Along with the installs came detailed questions about working with these technologies in the field:

The publicity also caused reactions from people, voicing both interest and concern. There was a private forest owner, who was concerned if the public would obey the rules of access in private forest areas, but there have been no tresspassers.

Working with a municipality like this was exactly the kind of collaboration we hoped for when we built the platform. It was great to hear the feedback, the comments and to figure out adaptations for the use in the field locally.

Many thanks to Sussane and the Vordingborg team, and to Joey van der Bie our lead developer for solving many small issues and questions!