In May 2018, the Eden Project in Cornwall opened a new permanent exhibition space called Invisible Worlds – covering all things too big, too small, too fast, too slow, or too far away in space and time for us to perceive.

FoAM was lucky enough to be asked to join the advisory panel, and also to have two permanent touchscreens installed to house our citizen science games. This gives us a highly unusual opportunity to test new games on very broad audiences, and a location where we can guarantee that the finished installations will attract a high number of players.

The screens are appropriately installed directly between the research lab and the soft play area in the Invisible Worlds building. Here's a shot of them being built, to give a little context: 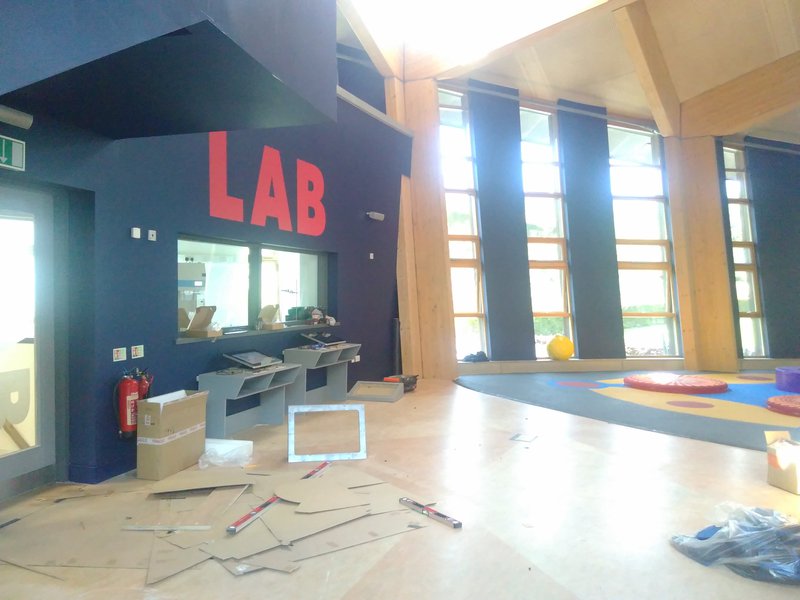 For the past year, we’ve been running the Crab Camouflage game (originally commissioned by the Natural History Museum) and Dazzlebug, collecting valuable data for scientific research on ecology and evolution. Over the 9 months since they were installed, the Crab Camouflage game has been played 39,434 times with 273,797 crabs caught, and Dazzlebug has been played 30,494 times (this equates to 966 generations of artificially evolved bugs and 122,682 bugs evolved in total). This means we are getting on average 259 games played/day.

For sustained and predictable numbers of players (and thus data), long-term installations seem like a better approach than releasing games online (which tend to peak early, with numbers falling rapidly unless continued effort is made to reach new people).

Soon we’ll be removing the Crab Camouflage game to launch our latest project, Cricket Tales. By tagging events in the cricket CCTV videos, players contribute directly to research which will determine whether crickets have individual personalities, and how well they are likely to cope as our climate changes. Dazzlebug will stay in place for a little while as it is still gathering data.

For all our citizen science games made for installations, we now show the players the latest data including the data that they have contributed - this is updated live during each game play. One of the most appealing aspects of doing scientific research is being the first person to find something new out about the world, and we hope that by giving the players access to the latest results before the researchers even see them, they can experience a little of this buzz.

We’ve had a few lingering questions about the installations – not being based on the Eden Project site means that we don’t see how people interact with them, or get the chance to gather any feedback that could be used to improve what we do in future. Over the past month we’ve been joined by the fabulous Karin Johansson for her MSc work placement – Karin spent a day at the Eden Project gathering some evaluation of players’ experiences with the installations. The data is available in full here and Karin’s observations are below.

During the day I spent at the Eden Project I conducted informal interviews with players about their experience of playing Dazzlebug and/or Crab Camouflage. I made general observations about how long each player/ group of players spent playing the game, their rough age, whether they played the game alone or teamed up and evidence of any emotions. Players were then asked a series of questions investigating if they enjoyed the game, if they experienced any problems, what they thought the game was trying to achieve, whether they actually looked at their results, if they understood them and finally, whether they felt like they had learnt anything by playing.

Conducting the evaluations in March meant that there wasn’t a great number of visitors coming through. I interviewed 10 players/ groups of players for the Dazzlebug game and 8 players/ groups of players for the Crab Camouflage game. Given that the installation is situated next to a soft play area, the players were mainly young families. However, some young couples without children and a few older individuals also played the games. Almost all the players played the games alone. There were a few cases where some families or couples would team up. Parents tended to set the game up for their children and then let them play on their own. There were instances where a child would play the game alone and then call their friends or parents over in excitement to play again with them. With there being two games right next to each other, groups or couples were more likely to split up and play on the other screen than to both/all play on the one screen. Most players spent about 1-3 minutes playing on one screen, with some spending a bit longer (about 5 minutes) and a few spending as long as 10 minutes playing. The majority of people played on both of the screens. -

- All but 3 players played the game more than once with the most being 6 times.

- Some players didn’t show any emotion but most showed evidence of being happy. A few couples and families were laughing quite loudly. Most players got quite competitive and wanted to either beat their previous score or wanted to beat their partner’s score. One player showed annoyance with the game and had to take a moment to step away and compose himself before he continued playing.

- Everyone affirmed that they enjoyed the activity: “It was fun.”, “Fun for both kids and adults.”, “It’s addictive, makes you want to play again and again.”.

- Researchers at the University of Exeter were curious to find out if players had a particular strategy for trying to catch the bugs. When asked if they had a strategy, 6 players reported that they tried to predict where the bug was going to go in order to catch it; 2 people said they tried using both hands; and 1 person tried using all 4 fingers (on one hand).

- The players were also asked if they found any bugs particularly easy or hard to catch. Most players said that the faster bugs were much harder to catch.

- Half of the players interviewed thought that the purpose of the game was to test your reaction time and test your hand-eye coordination. 3 players said they didn’t know what the game was trying to achieve. Despite there being a short block of text at the beginning of the game explaining that the installation was a citizen science game, only 2 players said that they thought that was what the installation was trying to achieve. This indicates that most people probably don’t actually read the text even though it is only a few lines long. Perhaps a possible way to encourage more people to understand what the purpose of the games are is to have an explanatory block of text on the wall. This would be in addition to the on-screen explanations not in replacement of.

- Only 3 players had heard of the term ‘citizen science’. Once the term had been explained to them, they were asked how clear it was that Dazzlebug was a citizen science game. Again, despite the text at the start of the game, several players said that this wasn’t obvious and only 3 players mentioned that the text made it clear. Some said it was only clear after I had explained it to them verbally, and some indicated that they just didn’t think about it or they just wanted to play the game. A young couple mentioned that their focus is just on looking after their children and making sure they are having fun, so they didn’t have time to read any explanations.

- Everyone said they looked at their results and that they made sense to them.

- Some players showed no emotion at all and some showed signs of happiness and joy. There was less laughing and no signs of frustration from players compared to the Dazzlebug game.

- One problem that came up for this game was that there was light creating a glare on the screen which made it quite difficult to see the screen clearly sometimes. Interestingly, there appears to be differences in the data collected from the installation at the Eden Project compared to the installation at the Natural History Museum where the game was situated in a darker space. This is important to investigate further and to take into consideration when installing the same game across different locations.

- When asked what they thought the exhibit was trying to achieve, a large proportion of players seemed to understand that is was investigating how well crabs can camouflage. 2 players explicitly said it was citizen science and only 1 player thought the purpose was to speed up reflexes. Players who were interviewed had often played both games and were interviewed about both. The Dazzlebug questions were always asked first which meant that when players responded to the Crab Camouflage questions, they already knew that Dazzlebug was a citizen science game investigating camouflage and hence assumed Crab Camouflage was doing the same. Therefore, these results are heavily biased.

- All but 1 player looked at their results. Those who did look said that their results made sense to them. The interview didn’t ask them to explain their results because we didn’t want to feel like they were being tested. Therefore, there is the potential that the players were simply just saying they understood them when maybe they didn’t.

- When asked if they learnt anything by playing, some players did indicate that they had in fact understand their results. 3 players understood that the results showed that the pollock is better adapted to spotting crabs than humans are. However, some players reported that they didn’t learn anything which may suggest they didn’t look at and understand their results.

Overall, the day spent evaluating the installations at the Eden Project revealed that visitors really enjoy the games. It was fantastic to see how positively people interacted with the screens and how keen and excited people are to play. These screens have highlighted that the use of citizen science games for exhibitions and installations at museums and other visitor attractions such as seaside arcades or pubs holds great promise. It will be exciting to see what outcomes and findings they may produce.