Posted May 6, 2021 by Amber Griffiths and Dave Griffiths

We teamed up with animal behaviour, perception and cognition researcher Dr. Laura Kelley to run an online workshop for people around the UK and Europe to learn about bower birds and see if they could build their own bowers, with funding from the Royal Society. Laura works on bower birds and studies the complex structures and illusions they create as part of their mating rituals.

We don't know much about how these birds build their bowers, so this is a bit like experimental architecture, to see how humans would go about it. We sent kits out containing all the necessary materials, bower bird themed snacks (by friends at Sohn Kitchen), postcards showing various bower bird species and their bowers, and critically, two small wood bower birds. The box contents varied depending on the materials that people selected when they signed up, containing either card (shown below), twigs, dried grass, bamboo, or no materials for those who wanted to forage for their own. 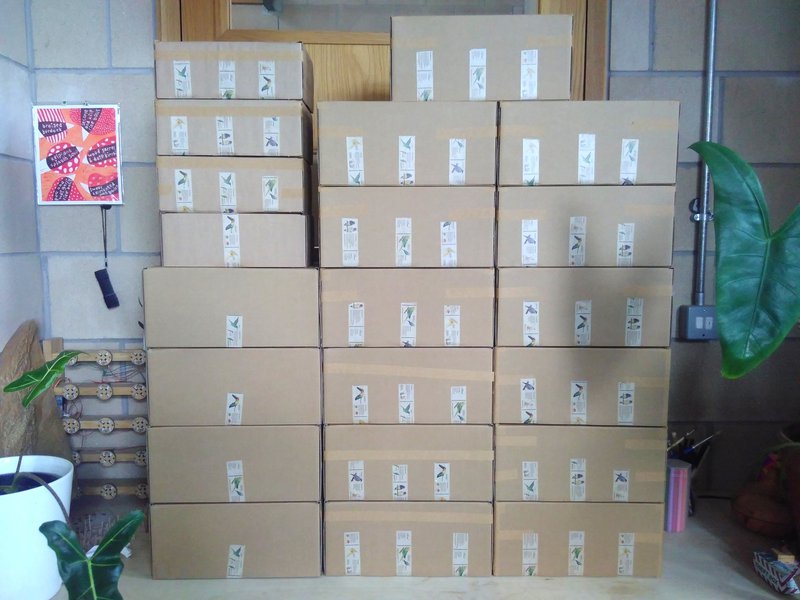 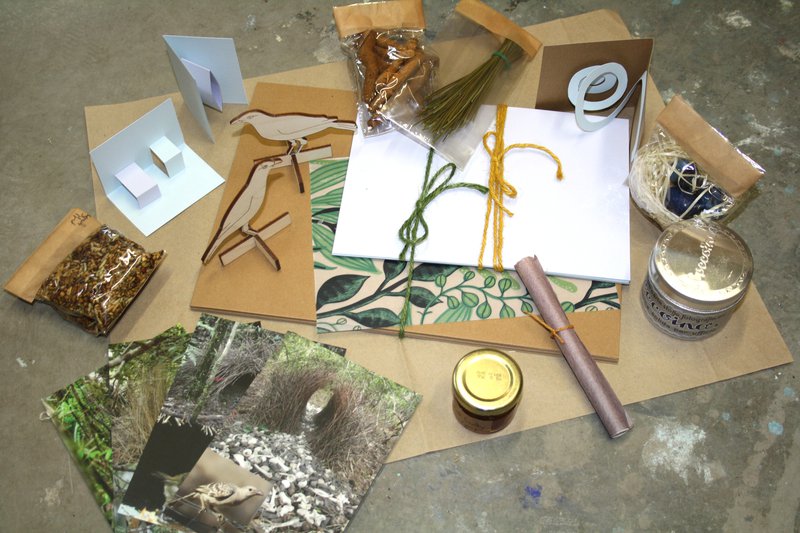 You can watch Laura's intro talk about bower birds and their illusion here:

Below are some of the bowers that people made, and their own words about their creations - the images are selected to give an idea of how they made the structures as well as their final design.

Jane and Paul Here are our results! We opted for an avenue style bower. We began by exploring a few ideas involving weaving, folding, cutting and joining our card. This allowed us to refine our thoughts before making the final model. The finished structure was simple but quite sturdy and the pointed strips of card seemed to grip together easily to form the top arch. We applied the principle of forced perspective to the avenue by gradually increasing the size of stones, shells etc, before adding a few bits of colour. 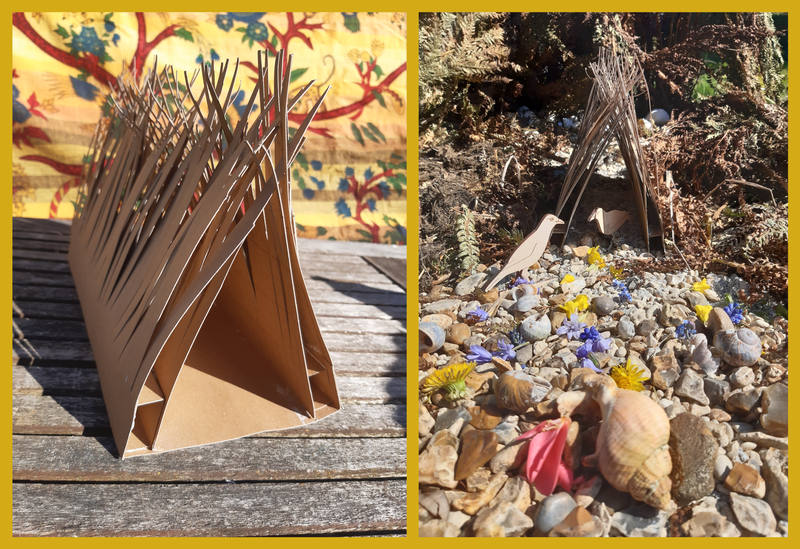 Hannah and Henry We choose the Great Bowerbird and had fun trying to make a pop up bower! We thought the bird would probably go for the bright dandelions that are strewn about here in spring so we picked those and mint and clover as his treasures! The female was very impressed.

Kelly and her son We had great fun participating and learned a great deal! My son decided on an avenue bower and flame bower birds. We used plenty of plasticine to anchor the upward twigs, as we couldn't manage to make a base out of the twigs like a bower bird would - the birds are much more clever! The natural curve of the twigs made it easy to make a nice avenue, and my son decided to try to get blue coloured decorations like a flame bird would. He used polished blue stones, and added white daisy flowers for the high contrast. We made it on 24th April, and it is still standing 5 days later. 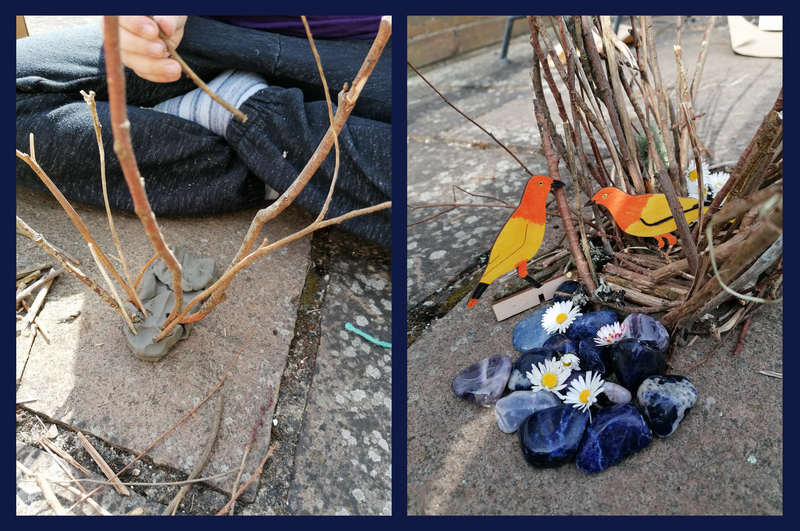 Rebecca and Sky Here is the Bower Bird structure I made. I pushed the willow into the ground and weaved a rambling rose into it. I then decorated it with flowers from the garden, petals, and shiny jewels (Sky aged 10) 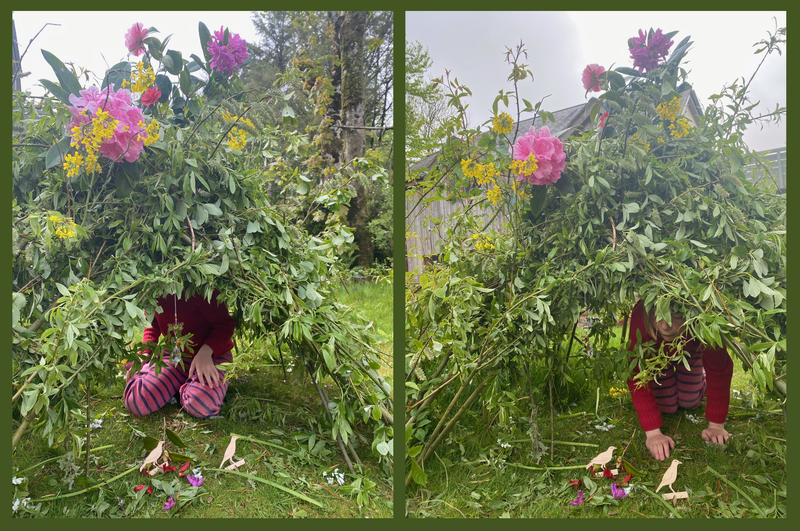 Paul and Caroline Had something much neater in mind but that's the story of my life. A born bodger. So my genes wouldn't get passed on if a bird but thankfully my wife doesn't mind too much so have 2 chicks! 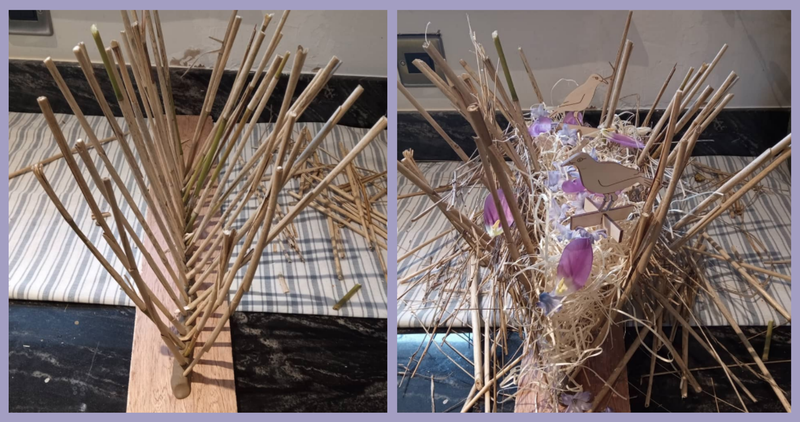 Mike I had a wonderful day yesterday playing with sticks and mud! I put quite a lot of thought into the structure and how it could be built and I have infinite respect for the bowerbird! Even with the significant advantages of a 6ft long body, 2 arms, opposable thumbs, a pair of snips and a veritable sack full of pre-foraged building materials this was still the work of hours of solid weaving and jamming sticks to try and emulate one of these incredible bowers. Having employed all of the sapien brain I could muster, I had hoped to end up with something akin to the Great Bower.... I think it's fair to say that I have not! I'm looking more along the lines of a drunk Satin Bower within the first year of apprenticeship! 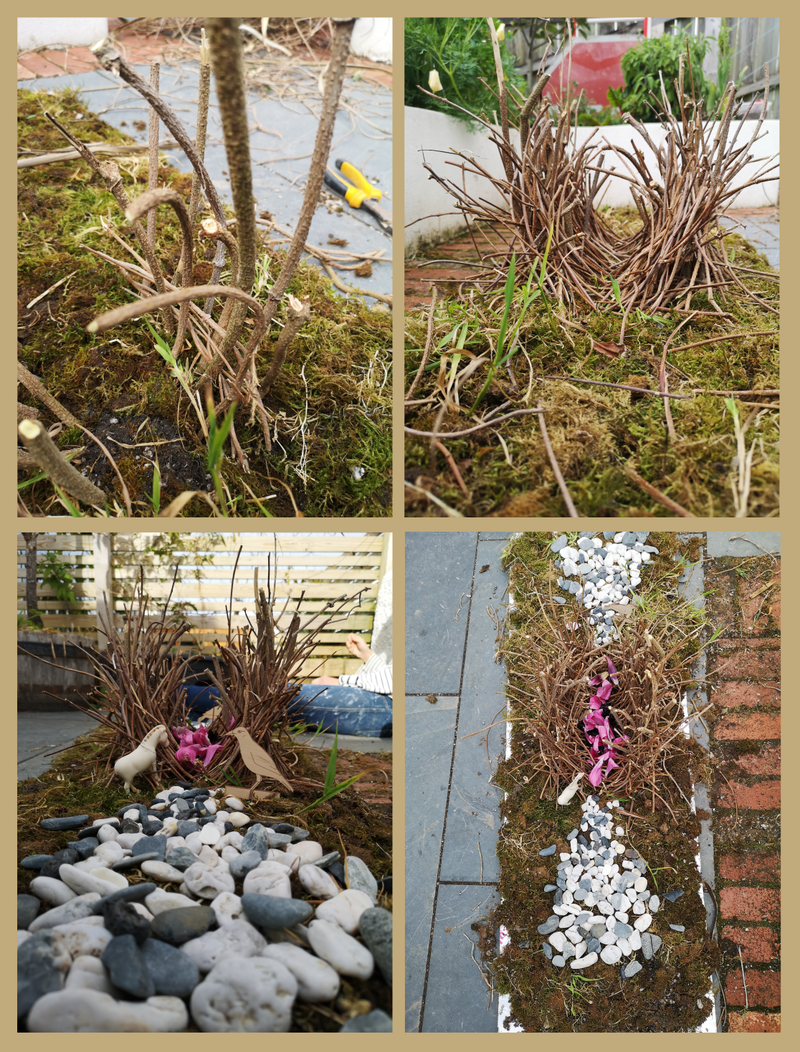 Dav I was really taken with the form of the avenue-style bower of the great bowerbird, so that's what I set out to create. It was much harder to build than I expected it to be. Even with the plasticine, getting the right level of density was tricky and things kept falling over. I can see how young males take several years to master the craft. My method was to secure the chunkier twigs - curving towards their opposite number at the tip - with plasticine, and then simply add more and more around them. Once this framework was in place, I was able to weave in/place smaller and lighter twigs around. I also tried to flare the base of both rows out, like two waves however, just like waves, these twigs kept crashing down! I'm chuffed with the overall result and whilst I didn't have many red and green objects to decorate the entrance, I think my lentil selection would capture the attention of a female!

Penny and Finn-the-pup Based on the Vogelkop bower, with a little ‘help’ from our new puppy.

Jacqui Had a great time doing this project and certainly learnt a lot. Not as easy as I thought it would be and struggled a bit with materials. Found these birds very interesting, building these  Bowers takes a lot of skill and patience! 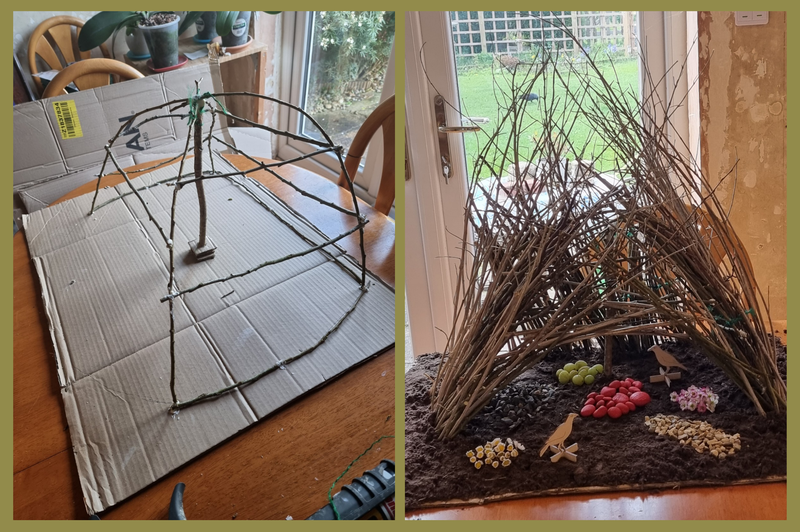 Aaron, Emma and daughters The Macgregor bower was built by Team Skinners Bottom who are Aaron, Emma and their two fledged off spring who contributed remotely via Zoom. We built the Bower over two mating seasons roughly an hour and a half each. The first season we assessed the materials given to us, discussed our options and some of us ate some great snacks. We decided to build a Macgregor bower and to use a potted tree from the garden as a support sapling. We began by trying to weave the twigs in place, but this did not work because it was really difficult to build the structure very high. We then tried to use the plasticine to fix the twigs to the sapling. This allowed us to build the structure higher, but it looked a bit sparse in the middle then after a while the twigs started to fall off. The second mating season was held a week later. We changed tack and rebuilt the bower using slightly different materials. We used grass cuttings and brambles to make a matrix around the sapling and then collected some thinner longer twigs and pushed them through the grass and bramble mix. We them decorated the bower with cherry blossom. This seemed to work a little better Unfortunately team Skinners Bottom did not attract a mate this season either, our bower was definitely not very attractive. We look forward to trying again next season and finding a mate in may be 6 or seven years after growing a magic beak. 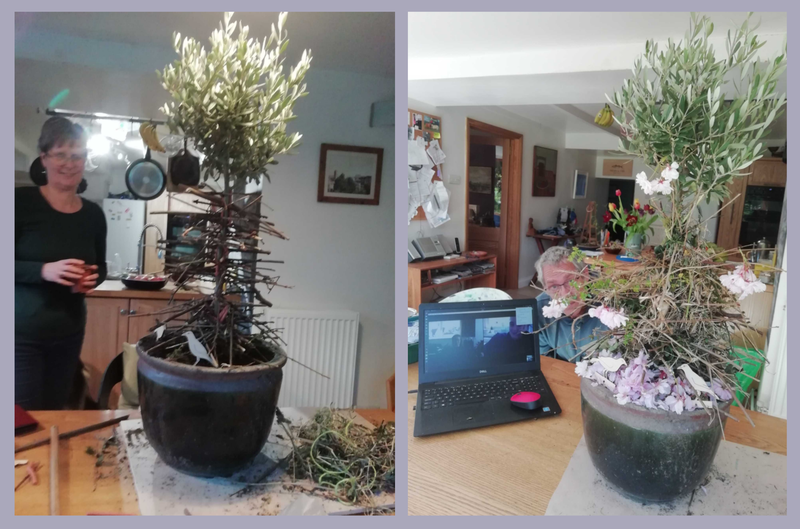 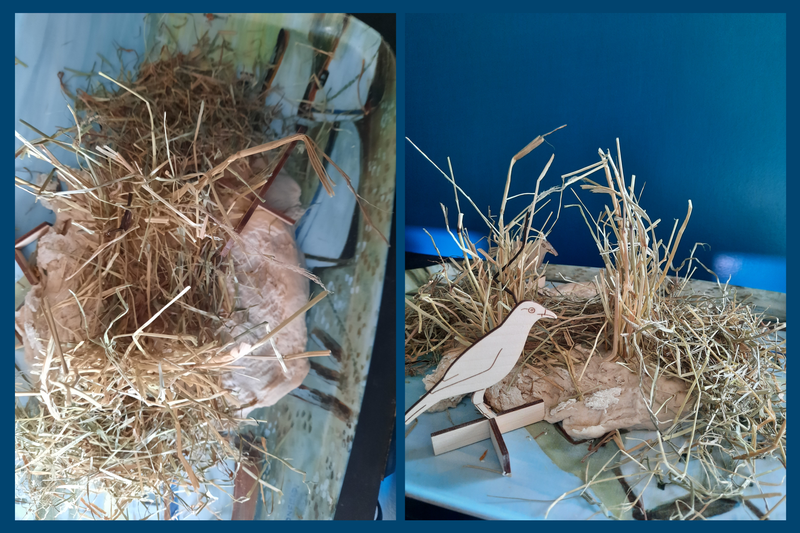 Jo and son You get 2 for 1 here as my son made one as well. I decided to make one of those that had 2 sides so I rolled out some plasticine, stuck the straw twigs into it vertically and then wove other things between the twigs - straw, string, other twigs and paper.  He used a plasticine base and stuck straw twigs into it to make a wigwam, secured at the top with more plasticine (image on the right).

Catherine and Arvo We positioned our bower just to the edge of our garden path so that we could take advantage of the stones to help us keep our sticks and twigs upright. We each tried to create a slightly arched side with the longest sticks towards the middle and the shorter ones towards the front to create an appealing shape. The more we added, the more strength we could give the structure by knitting the tops of the sticks together a little on each side. Arvo then collected fallen tulip petals from the garden to create a carpet of magenta and maroon. We loved the way the colours complemented his hockey socks!! We intended to finish there until we realised that there were some bluebells which had just been put on top of the compost pile after they had been flattened the previous night, perhaps by a fox. We thought that their hue belonged in our colour palette too, so we retrieved the trodden bluebells and wove those in to add a colourful temporary roof to add a splash of romance for our birds!

Laura (Dr. Bower Bird) and James James built a Vogelkop and I went for a great bowerbird bower. Mine was originally pop up, but it all got a bit complicated and kept falling over so I removed the pop up bits in the end!

Thanks to all the bower bird stand-ins for taking part and building such brilliant and beautiful bowers, and helping us to figure out how bowers might be made by the birds. 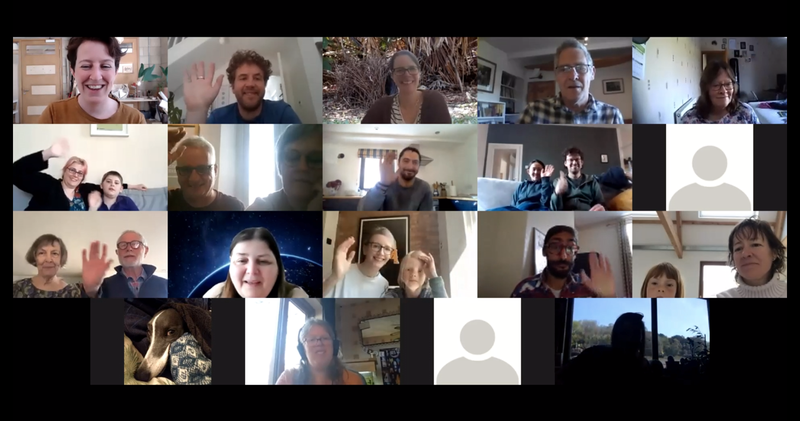 And thanks to the brilliant Sohn Kitchen and Persian Cacao in Sheffield for devising and providing the snacks, and to the St Agnes CNC Craft Maker Space for cutting the wood bower birds for us. 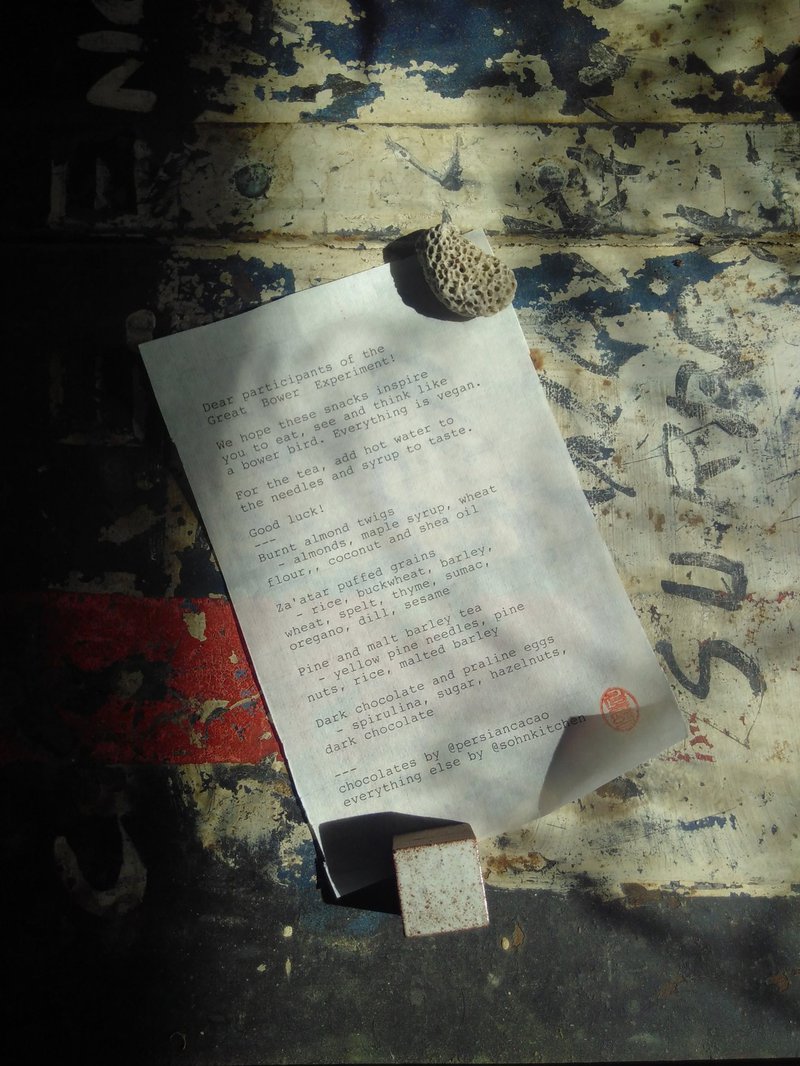 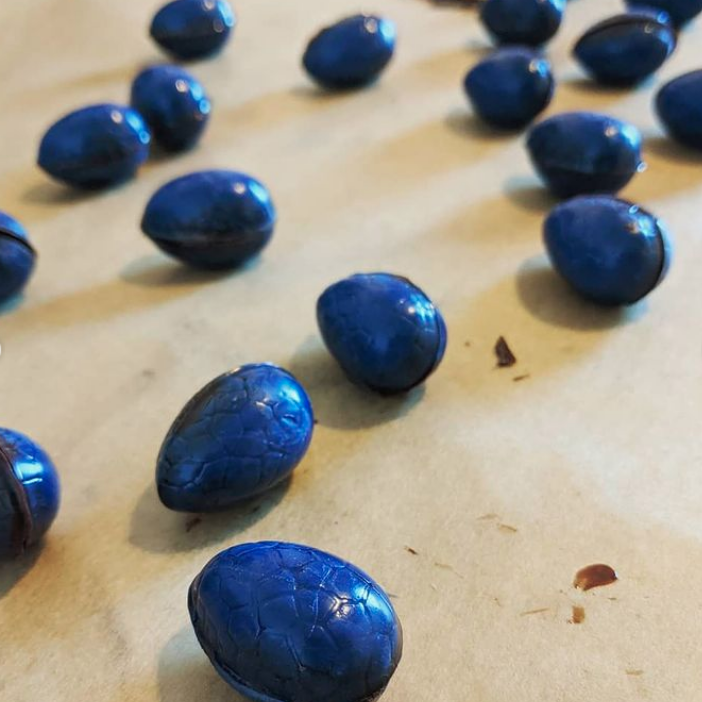 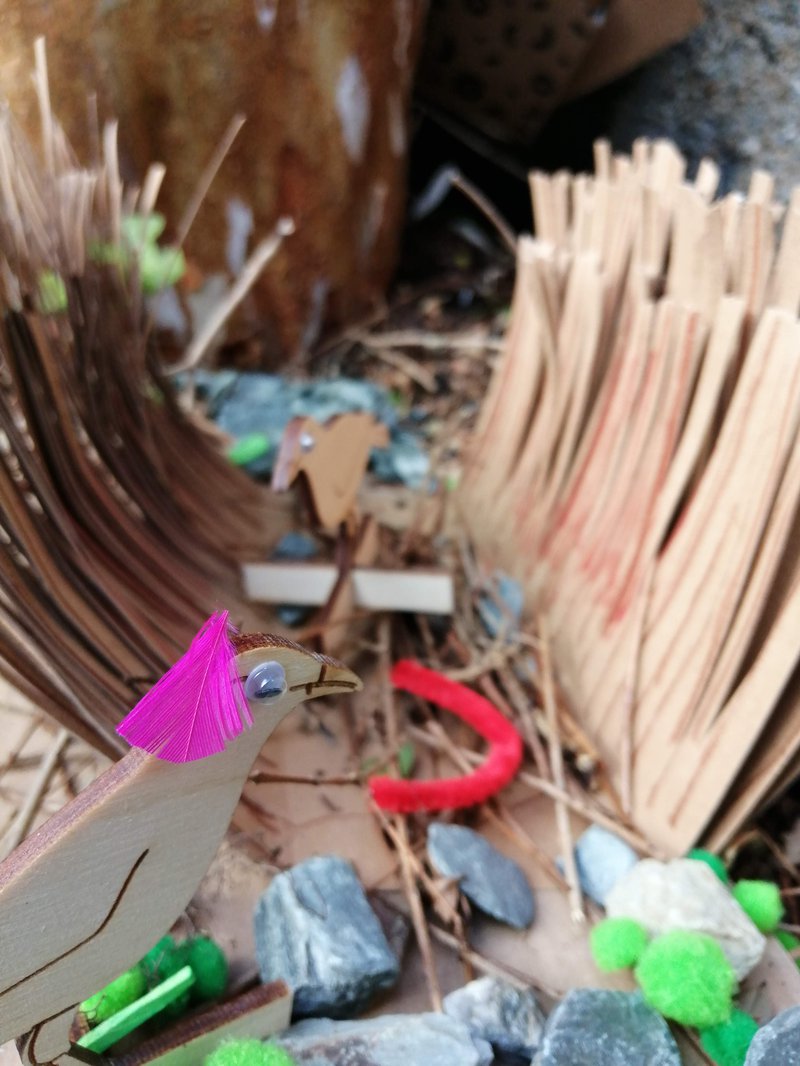