Two presentations from FoAM’s artists-in-residence from down under, with a gastronomic degustation of “native foods” from Australasia. r a d i o q u a l i a (Honor Harger) presents Sonifying Space: Creating Radio Astronomy, and Rachael Tempest and Lucas Chirnside present softBomb. Part of OFFF04: http://www.offf04.be/. 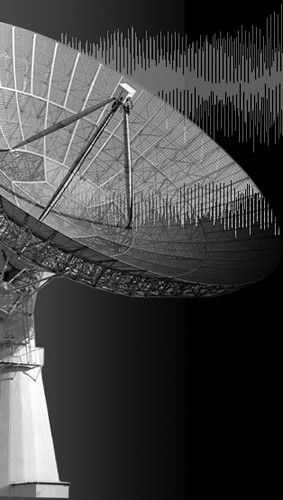 The weight of imagery associated with space is overwhelming. We can all look at space, in pictures on television, in books, and on the internet. But in popular culture, we have no sense of what space sounds like. In film, on television, and in documentary, space is usually depicted as an aural void. And indeed, most people associate space with silence. This is in fact a misnomer. A great percentage of our scientific understanding of space has been derived by listening to space through radio telescopes. The data we glean from listening to space is every bit as significant and important to our comprehension of the Universe as more traditionally understood optical observation. Yet even the scientific perception of radio astronomy is largely visual. Despite the fact that objects are observed and recorded using radio, a technology commonly associated with the transmission of sound, emissions are represented using graphs, diagrams, graphic visualisations and other visual media. Many objects, do however emit radiation which can be made audible, making it possible to hear the Universe. Space, as it turns out, is a very noisy place, with many planets and stars containing their own sonic signature. And yet, very few people have ever heard space. Hardly any of us could describe the sound of a single planet or star.

Sonifying Space: Creating Radio Astronomy will explore this quandary. It will present audio recordings of objects such as the Sun, Jupiter and the Vela Pulsar, and use these sounds to demonstrate a process known as “sonification.” Sonifying Space: Creating Radio Astronomy will discuss sonification in relation to an artwork-in-progress called Radio Astronomy. Radio Astronomy is a conceptual art project which will make audible the supposed silence of sidereal space by broadcasting live sounds intercepted by radio telescopes. The project is initiated by art group r a d i o q u a l i a , and is a collaboration with astronomers, engineers, radio and television stations and astronomical institutes such as the Windward Community College Radio Observatory in Hawaii, USA and the Ventspils International Radio Astronomy Centre in Latvia. Radio Astronomy will enable listeners to tune into to different celestial frequencies, hearing planets, stars, and the constant hiss of cosmic noise. It will reveal the sonic character of objects in our galaxy, and in the process perhaps make these phenomena more tangible and comprehensible. The project is indeed radio astronomy in the literal sense - a radio station devoted to broadcasting sounds from space. As well as indicating how audio can often by the best way of representing complex scientific data about specific astronomical objects, Sonifying Space: Creating Radio Astronomy will also show ways in which the sounds recorded by radio telescopes can be interpreted within the contexts of information aesthetics, conceptual art, and avant-garde music theory. It will outline the correlations between Radio Astronomy and musique concrete, and illustrate the ways in which this work exists within the tradition of the ready-made.

r a d i o q u a l i a is an art group from New Zealand. We have been based in Europe since 1999, and exhibit, publish and lecture internationally. We are currently living in Latvia. r a d i o q u a l i a works in the fields of art, science and technology. Our principal interest is in the ways that broadcasting technologies such as radio and online streaming media can be used to create new artistic forms, and in ways that sound art can be used to illuminate abstract ideas and processes. We have been creatively working with radio for over ten years, and internet radio for six years. Sound art and experimental music is also core to our practice. We have created many sound installations, performances and CD releases of our own work. We have recently completed a two radio programme retrospective for Radio New Zealand (airing 18 April and 25 April 2004), and recently produced an installation Small Gallery at the California Institute for Art in Los Angeles, USA. Radio Astronomy is supported by the Daniel Langlois Foundation for Art, Science, and Technology. In September 2003, r a d i o q u a l i a were awarded the Leonardo-@rt Outsiders 2003 New Horizons Prize for their work in this area, together with the participants of the Open Sky installation at the @rt Outsiders exhibition at the Museum of European Photography in Paris. r a d i o q u a l i a’s work has been exhibited at the New Museum of Contemporary Art in New York, USA; Gallery 9, Walker Art Center, Minneapolis, USA; Maison Europeenne de la Photographie in Paris, France; the Generali Foundation, Vienna, Austria; Chapter Arts Centre, Cardiff, UK; Sonar 2001 in Barcelona, Spain; VideoPositive2000, Liverpool, UK; the Machida City Museum of Graphic Arts, Tokyo, Japan; Ars Electronica 1998, 1999, 2001, 2002, 2003 in Linz, Austria; the Bregenz Festival 98 in Austria; the Lux Centre in London, UK; Iona Gallery, Scotland; the Experimental Art Foundation in Adelaide, Australia; CACSA in Adelaide, Australia; The Physics Room in Christchurch, New Zealand, Artspace, Auckland, New Zealand, and the HDLU in Zagreb, Croatia, among other places.

softBomb is a highly interactive installation, (currently in the design and development phase), for public use in museums and galleries; and creative misuse as a performance tool. softBomb is being developed through FoAM. The core team are Rachael Tempest and Lucas Chirnside.

The purpose of softBomb is to allow people to take a range of 3D virtual objects and ‘turn them on’ in 3D gamespace. Using their body to play directly with a virtual object, knowledge and information about that object is ‘released’ from it as a constant flow of data. This data is the type of content virtual technologies should augment us to access - all that makes objects and artefacts meaningful and compelling - their physics, their chemistry, their story; what makes something historically significant, its use, its misuse. As this flow of data is released from the 3D virtual object, it’s simultaneously streamed into a custom-built 3D visualisation engine that we call a ‘softBomb’. A softBomb could be described as a virtual version of the glass display cabinet - a common way to display static realworld artefacts. However softBomb takes this basic idea and re-invents it as a malleable virtual interface - all the edges and planes of the cabinet become both lenses and projection screens for experiencing the many hidden lives of an object. As a virtual object is “played,” physical information like G-force, torque, speed and structural data, cause the cabinet’s surface to morph, bloat, shear and scrunch, manipulating the form into new readings of the physical processes at work. Simultaneously, video data, images and sounds are streamed onto the virtual cabinet glass, producing a rich associative field inciting the player to play more.

softBomb was born of a desire to create access to the dynamic potential of objects and artefacts that are either inaccessible, or need to be ‘activated’ to be meaningful. These types of objects might include:

Lucas Chirnside is an architect and member of CTco-LLab, currently developing projects in object design and interactivity. “softBomb” explores the potentials of interactive 3D environments and spatial interface design for accessing cultural heritage sites and volatile artefacts. Lucas seeks to mesh physical spaces with digital interfaces, positioning the user at a nexus of potential strongly informed by the body. Lucas founded PoHa (object design) at Tokyo Designers Block 2002, and has recently been published locally and abroad as an innovator of contemporary object design. Lucas develops physical and digital environments that engage performative operations and unstable object states. During May 2004, Lucas will be presenting softBomb at NODEM (Nordic Digital Excellence in Museums, Helsinki, Finland) and undertaking the f0am AiR program, supported by the Ian Potter Cultural Trust (AU). In December 2004, Lucas will take up a 3-month residency in Milan, Italy hosted by the Australia Council For The Arts. Lucas is based in Melbourne Australia.