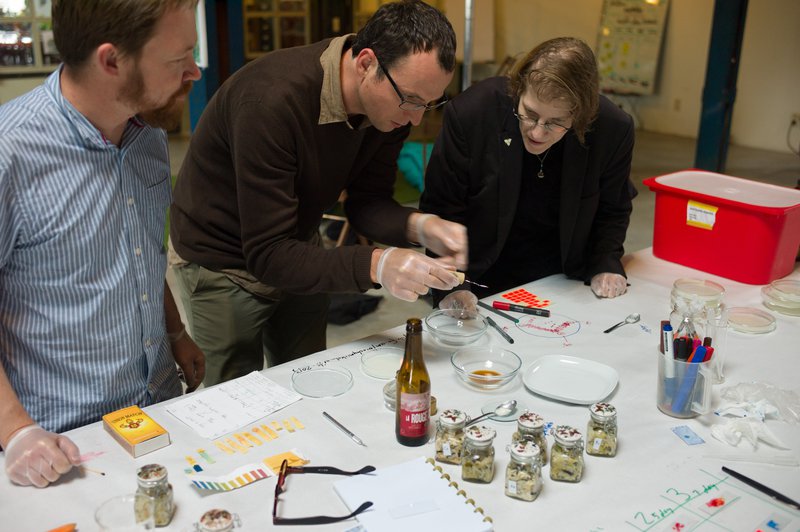 We talked about and experienced the language of embodied gestures that makes up any craft and is a part of the vast ocean of tacit knowledge that is in danger of being misinterpreted or forgotten when it crosses into another culture. We've seen how trying to follow easy instructions to prepare slides for examining fermented vegetables under the microscope becomes a messy and fiddly task when we don't have the experience in our fingers, and when we use tools that aren't quite appropriate. Or trying to learn the particular gestures used to streak bacterial colonies, or knowing the magic of picking herbs before dawn, or stirring milk for yoghurt… not to mention the codes and gestures of hidden fermentation networks in Japan, so similar to the secret handshakes of some of the European occult brotherhoods.

It became apparent just how much variation there is in the terminology we can use to describe the same thing (e.g. describing bacterial cultures added to a new fermentation as triggers, starters, or mothers; Lithuanian brewers avoiding the term "brewing" to describe what they're doing…). These differences exist not only between disciplines, but also across time – Maria noted how Japanese craftsmen used to describe their practices in such poetic ways that they sounded more like a myths than processes. Or the scientific terminology used by Meredith to describe the "metacyc" pathway: while the language is internally consistent, it is easily misunderstood or even incomprehensible outside of the culture that produced it.

Multiple "cultures," and the relationship betwen culture and the environment, were strong themes throughout the day. Crossing continents to learn different fermentation techniques in Japan or to obtain Jewish bacterial cultures in NYC; observing and understanding bacterial cultures growing on various nutrient media; inoculating Petri dishes with cultures from vegetable and milk fermentations – the diversity of environmental and habitats and conditions influence the techniques and tastes of fermented goods produced in them.

Maria mentioned that the health of the environment is directly related to the taste of fermented goods. In terms of bacterial cultures, we talked about fermentation as a dynamic process of succession of bacterial cultures which manipulate their environment to suit themselves, creating a monoculture and proliferating so much that they literally sour their own environment and die off (we humans should be able to learn something from this!). At the same time, they prepare environmental conditions that are perfectly suited to other, acid loving cultures – as we saw when we measured the pH levels and found that even the youngest ferments were in the acidic range.

Meredith described fermentation as a metabolic process which – as with other cooking processes – eliminates the bacteria that eat us, and proliferates bacteria that help us eat. Maria talked about using fermentation for preservation, but also for intensification of flavour (or production of alcohol) – both of which can help us digest substances that would either be rotten or bland if eaten in high enough quantities and for a long time (the whole winter). Meredith talked about the metabolic pathway of vitamin C and asked whether we can engineer gut flora to produce vitamic C in our body to help us survive in harsh situations. Could we introduce them in our gut through an appealing medium such as yoghurt, rather than a disgusting mush of E. coli? We ended with a lot of open questions, such as: when is the concentration of vitamin C highest in a fermentation process?

When looking at the day in review, one word kept popping up: essence. Eating the tiniest pieces of the precious funazushi; the Sisyphean task of slicing minuscule pieces of decomposing vegetables to make microscope slides; tasting one clove of garlic fermented in tamari between ten people; Riita's three-ingredient buckwheat bread: all these pointed to the frugality, gentleness and intensity inherent in the processes of both fermentation and DIY biohacking. And of course code or recipe as the essence or source of much complexity in both food and software. The ancestral codes of fermentation wrapped in myth and rituals. The cultural decoding of funazushi as Parmesan in Italy and Roquefort in France. Learning how to follow and how to let go of recipes from Japan, Korea and Europe. The low-tech hacks of lab equipment, like Nik's inoculation loop made out of a paperclip and a cork from a wine bottle. A lot of our work seemed to turn on learning how improvise.

Notes from the workshop can be found at http://lib.fo.am/biochymickal_arts_2013