"...is Media. And media is how people express and communicate. Your voice is a medium, writing is a medium, art and video and... Yes, even poking someone repeatedly or jumping up and down or twitching your eyes in a pattern can be using a medium - your body - to communicate." from Plural of Medium by Savannah Logsdon-Breakstone

When i think of Lola i always hear this song in my head:

"Tall and tan and young and lovely
The girl from Ipanema goes walking
And when she passes, each one she passes goes - ah...."

Lola is beautiful. Not so tall or tan or lovely in the same sense. But very beautiful.

"When she walks, she's like a samba
That swings so cool and sways so gentle
That when she passes, each one she passes goes - ooh..."

Lola isn’t like a samba , she doesn’t swing so cool or sways so gentle. When she passes by no one goes ah or ohh or anything els. Nevertheless Lola is beautiful.

Lola is a medium build young woman with fair long hair and blue eyes hidden under her overgrown fringe. She always wears plain clothes: jeans, a grey t-shirt with undistinguished print, a greenish grey sweater and a dark coloured jacket if it is cold. She doesn’t stand out from the crowd in any noticeable way. Lola is autistic. She is also non verbal. What does it mean non verbal? She is not mute or deaf. There is absolutely nothing wrong with her ears, tong or vocal cords. Lola just doesn’t speak. Actually, she doesn’t communicate in any way we are used to at all. She doesn’t use her body language to express herself, doesn’t wave her hands to make herself noticed. If you ask her direct question all she does, she slightly nods her head down for “yes” and moves her head gently sideways for “no”. Otherwise she doesn’t pay any attention or look at you when you talk to her as if she doesn’t hear you and as if she is not there at all. As if every time she melts deep into the silence when she stands next to you.

“I wish you wouldn’t interpret my silence as silence.
My silence is, in fact, a compliment. It means that I am being my natural self. It means that I am comfortable around you, that I trust you enough to engage my way of knowing, my way of speaking and interacting.” From Socialising Through Silence by Melanie Yergeau

Lola communicates not only through her silence but also trough her presence. She talks through extremely small but perfectly shaped handwriting, through meticulously executing every creative task and then stubbornly refusing to show her results. Lola also makes herself understood through her pictures.

I met Lola during our monthly walk in Geel. I had displayed several photo cameras on the table before we left for the participants to choose from. Lola shyly came to the table and almost without any hesitation slightly moved her hand towards an old Pentax. I asked if she understands that this is an analog camera and is a little different to use than a digital one. She slightly nodded for yes. I briefly explained how it works and how to use focus just in case. With much confidence she put the camera band over her neck and disappeared among other participants. During the walk I observed her. She photographed everything with great concentration, took long time focusing and didn’t copy me as the other participants did. Lola moved along and held the camera in her hands with confidence, as if she was doing this everyday and for a very long time. At the end of the walk I checked the counter, she took 12 shots. The other participants used several film rolls or had more than 100 shots on the digital devices. I was intrigued and couldn’t wait to process film and see the results. 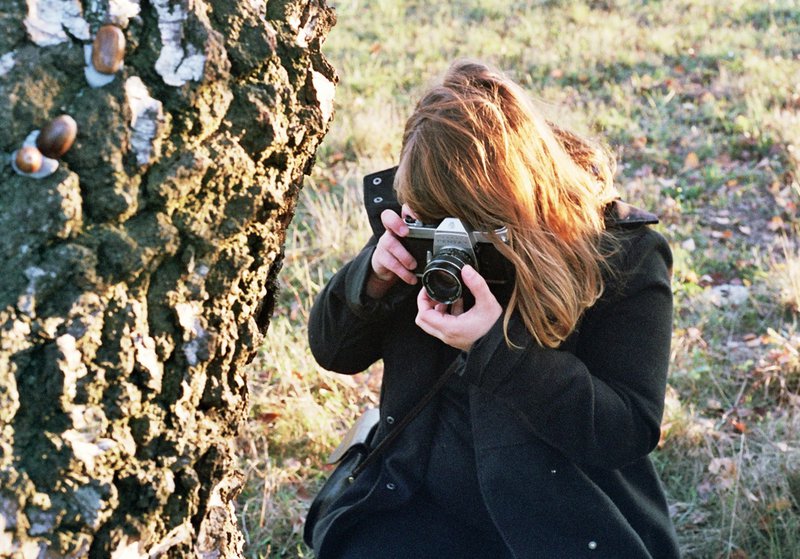 At home I hurried to the garden to use up the remaining frames on the film. When finished I started to wind the film back. In my mind I already pictured amazing images captured by Lola. I didn’t pay any attention to what I was doing. I didn’t listen to the cracks and clicks that my camera made. I didn’t even try to feel how much resistance there was on the turning wheel. At some point I just pulled the camera case open thinking that the film would be back in its casing. No! Film wasn’t wound back until the end. I exposed the negative! I ruined at least a few images on the film without repair. With trembling hands I quickly shut the cameras case and wound the film till the end this time knowing that most of the photos by Lola were gone. My heart sank to my knees. Not only was I disappointed that I might never know what was on it, but I felt very guilty for letting Lola down. Me, the so “able”, artist, teacher, coach, photographer ruining something very precious made by someone regarded as “not able”, nonverbal, not normal or often even stupid.

Well I didn’t ruin all the pictures of Lola. Few of them turned out to be undamaged or just with minor light leak. She did use the camera appropriately as I thought: she focused well and listened to the tasks I gave. The composition and looking angle was unusual but also interesting. I was very proud of her and not so much of myself.

Next time we met I brought the printed few photos of hers and told Lola what happened and why. She didn’t look at me as if she didn’t listen or understand or care about what I was saying. She took the photos and quickly went through them. Just for a second I did see a shadow of disappointment in her eyes. Next to it I also noticed a faint smile on her face. As if she was trying to tell me not to worry about it, that it was a simple mistake that could have happened to anyone and that there will be more walks and more beautiful pictures taken by her. Or maybe I just wanted to hear something like that...

Lola is very beautiful to me. Because the world that she sees through the lens is filled with kindness, love and dark magic. Because she lets me connect to her without talking, gesticulating or touching, but by simply being there as she is with all the honesty, trust and forgiveness. When I’m in her company I don’t need to pretend or worry. I just need to try to do my very best. 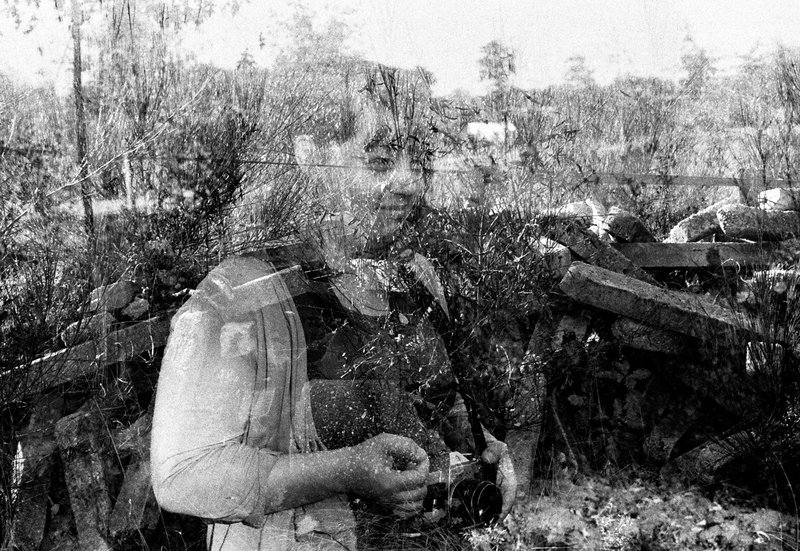 By silent request there are no photos made by Lola in this post.