Rocket Boat Day: the winning boat and its float towards victory 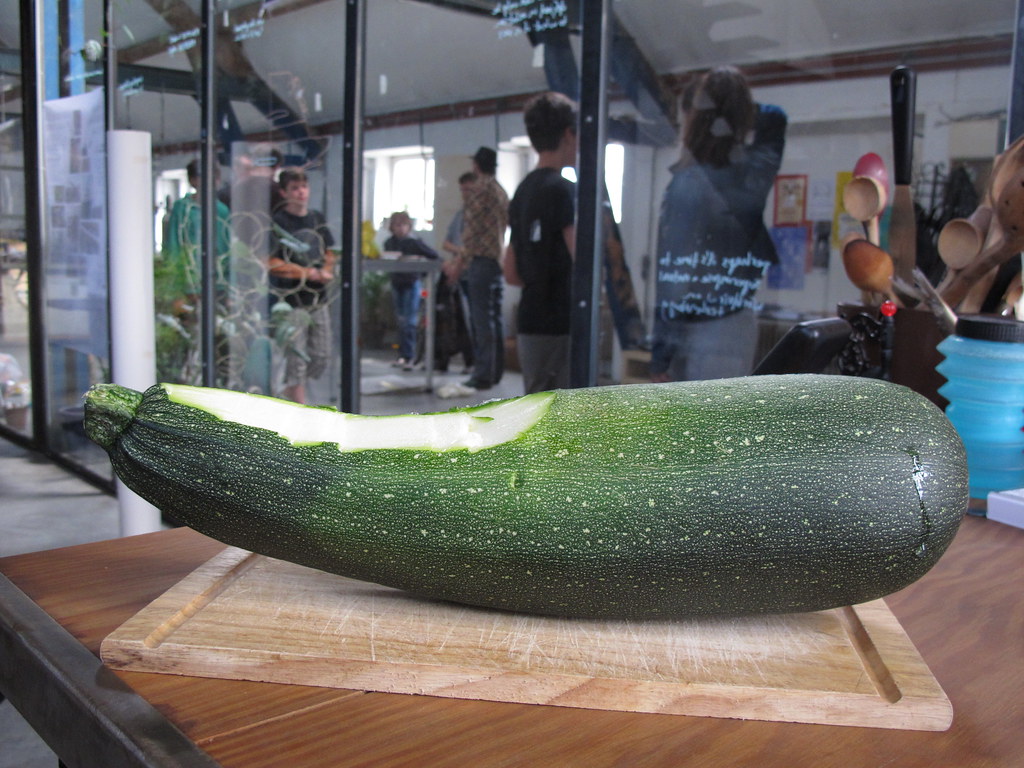 The Rocket Boat Day workshop was three days away and I hadn’t thought much about it. I had been busy in Gent working on a FoAM project called Borrowed Scenery for the Electrified Festival. I was meeting locals who work with plants and documenting their stories as part of the project. I was at Groenten uit Gent at DOK… a vegetable garden run by a drug prevention and social work centre which helps integrate people back into the workforce by giving them the opportunity to volunteer at the garden. After meeting with Willem, the Project Officer, he mentioned that there were vegetables for sale at the entrance. I took one look at the huge courgettes on offer for €1 each and decided to select the biggest one. I had found my boat! Carrying it back to Brussels that night, I had to nurse it on the train like a small baby. Kids were staring at me in wonderment. Its sheer size was turning heads – just wait until I turned it into a rocket boat. 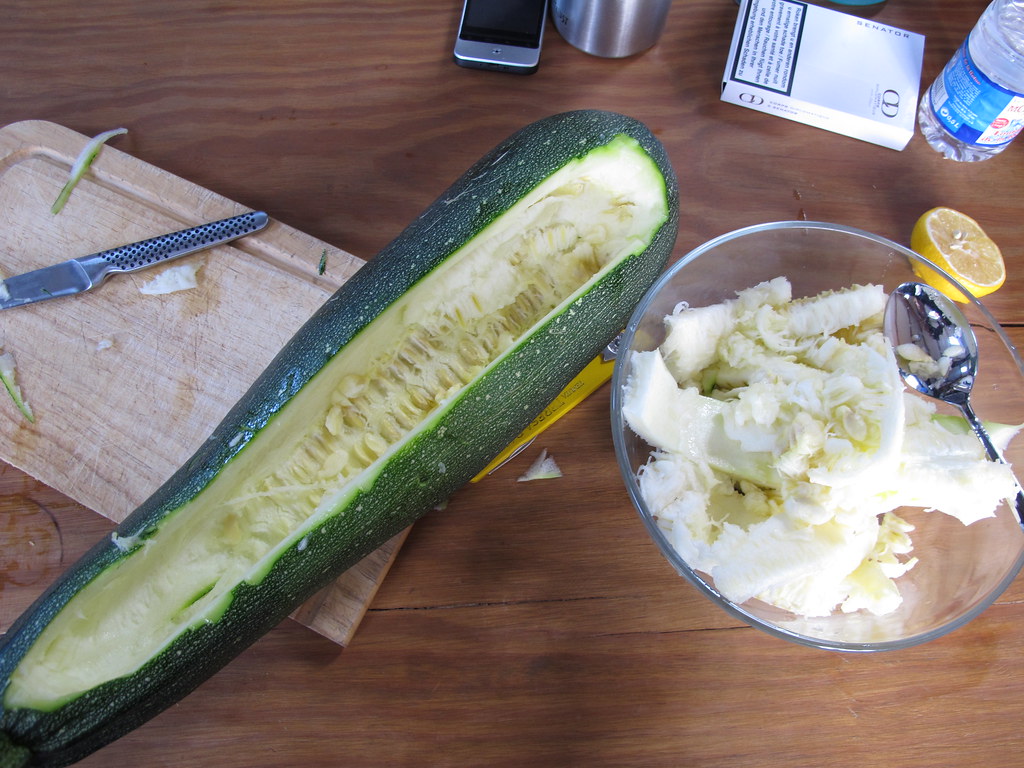 When the workshop started on Saturday at lunchtime, my first priority was to take as much of the flesh out of the courgette to hollow it out and lighten it for floating purposes. I kept the flesh in the fridge to be cooked at a later date. 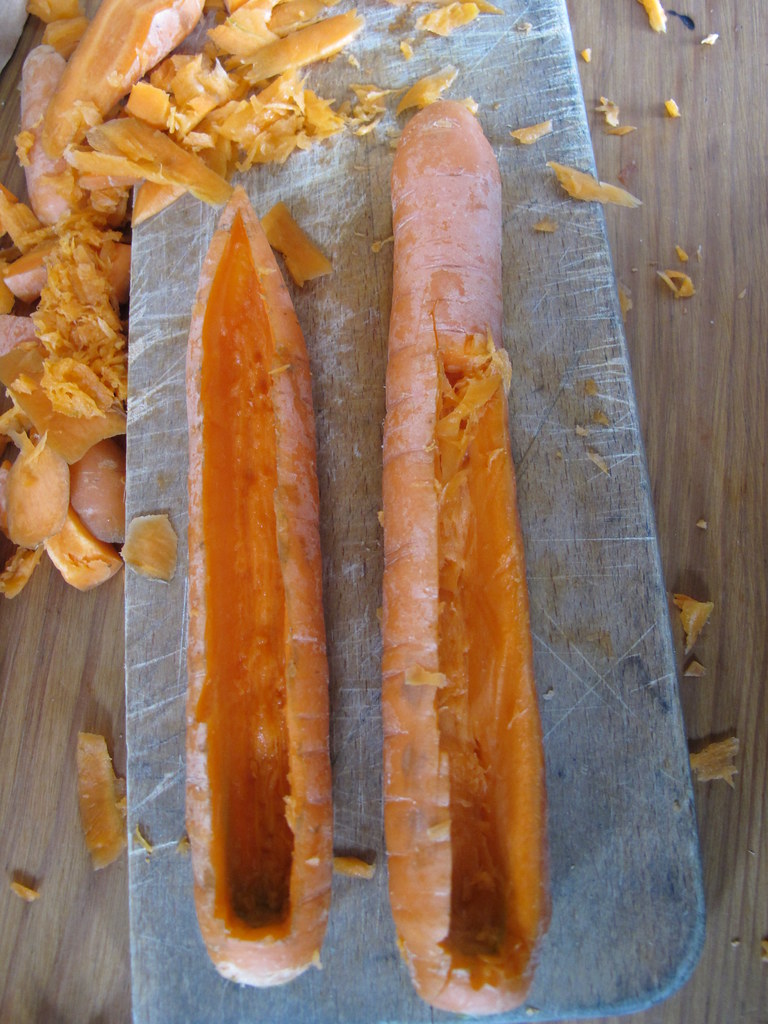 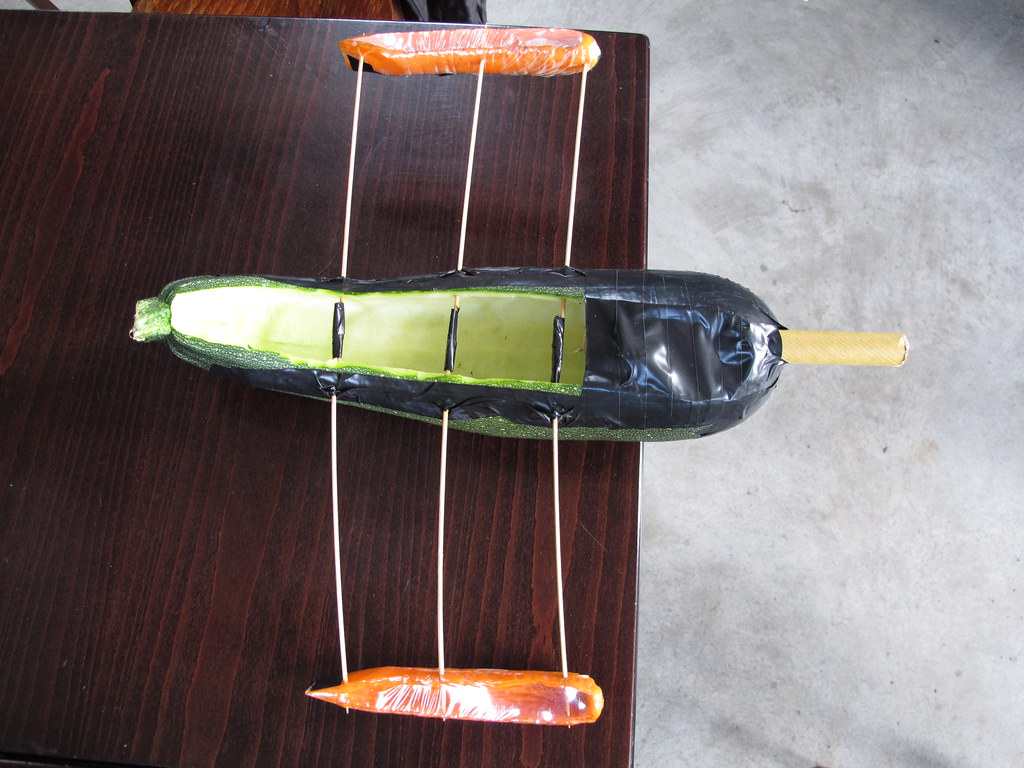 Next I needed to create some kind of mechanism to balance the ‘boat’ as being round it tended to roll from side to side when in the water. I decided on a catamaran design and jumped on my computer to google images. I noticed that the design focused on sharp points at the front to cut through the water to prevent dragging. I decided on carrots as a material for these side sections. They were a good shape, and by hollowing them out I could make them light and dynamic. I connected the carrots to the courgette with wooden skewers. I tested the design in the bath and sadly the carrots were filling with water. A quick visit to the glad wrap supply in the kitchen fixed this problem and my carrots were now sleek glad-wrapped balancing vessels able to withstand any kind of wave. 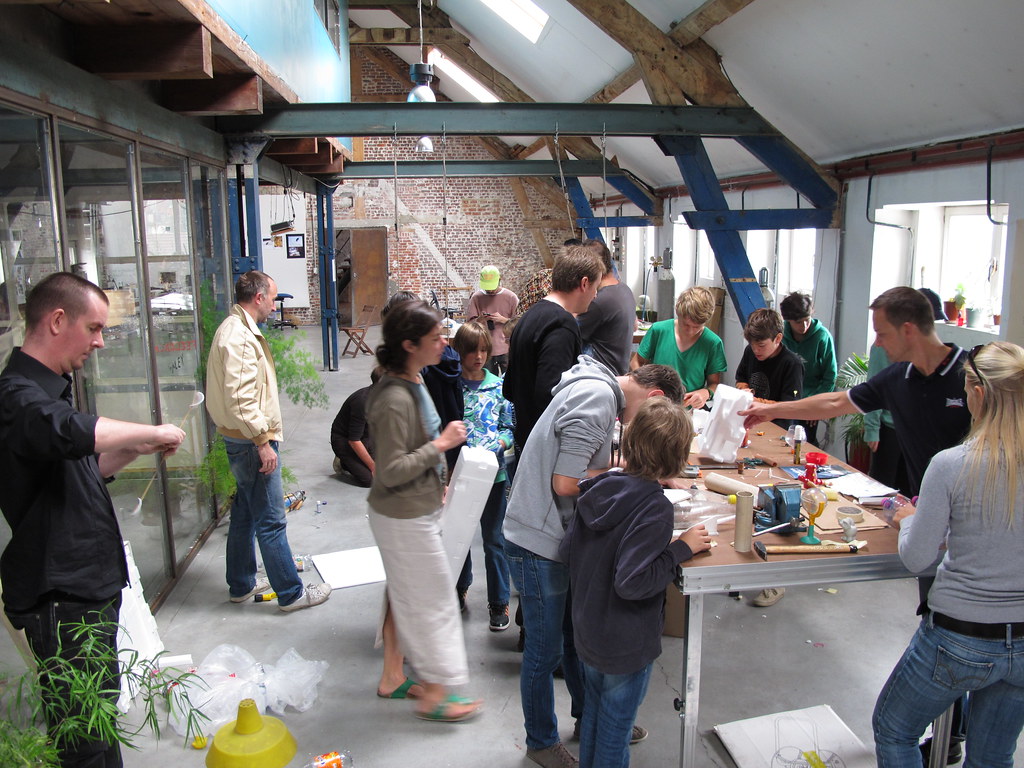 Meanwhile the workshop was getting very busy. We had lots of visitors with many children and their families dropping in to make a boat. The 4pm race was looming. I put the finishing touches on my boat, including a rudder made from a paper knife and some black electrical tape to seal the toothpicks and rudder in place. I named my boat the Zu-Courge Cruiser (with a nod to the Zuchinni) aka Vegetable Express. 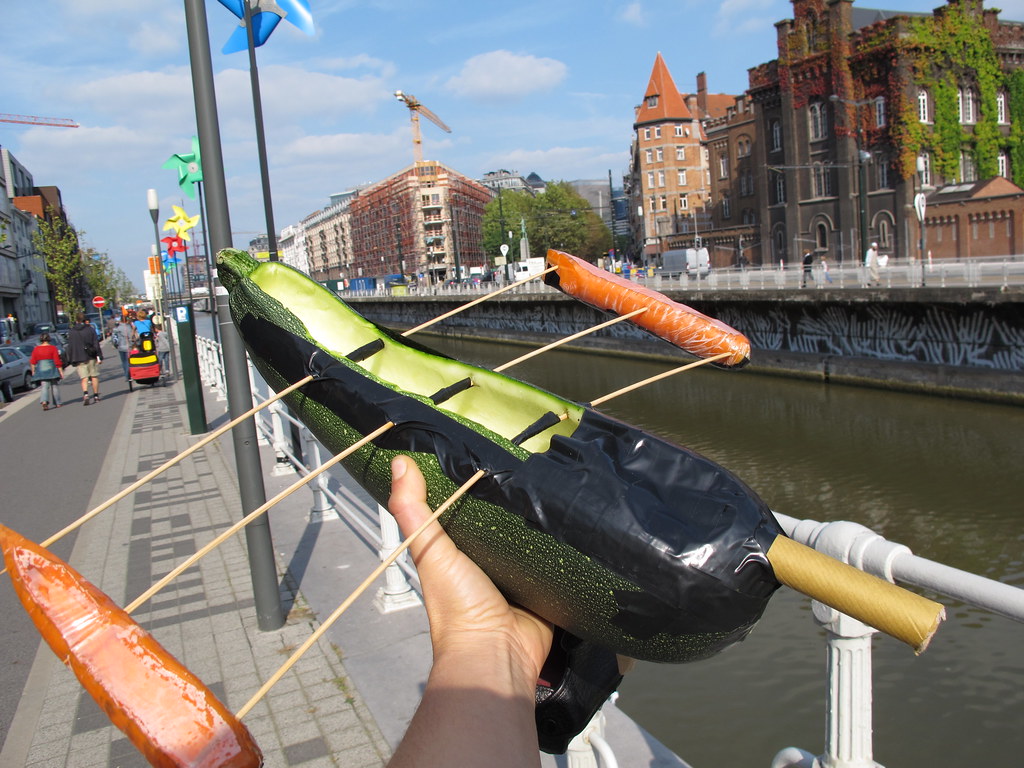 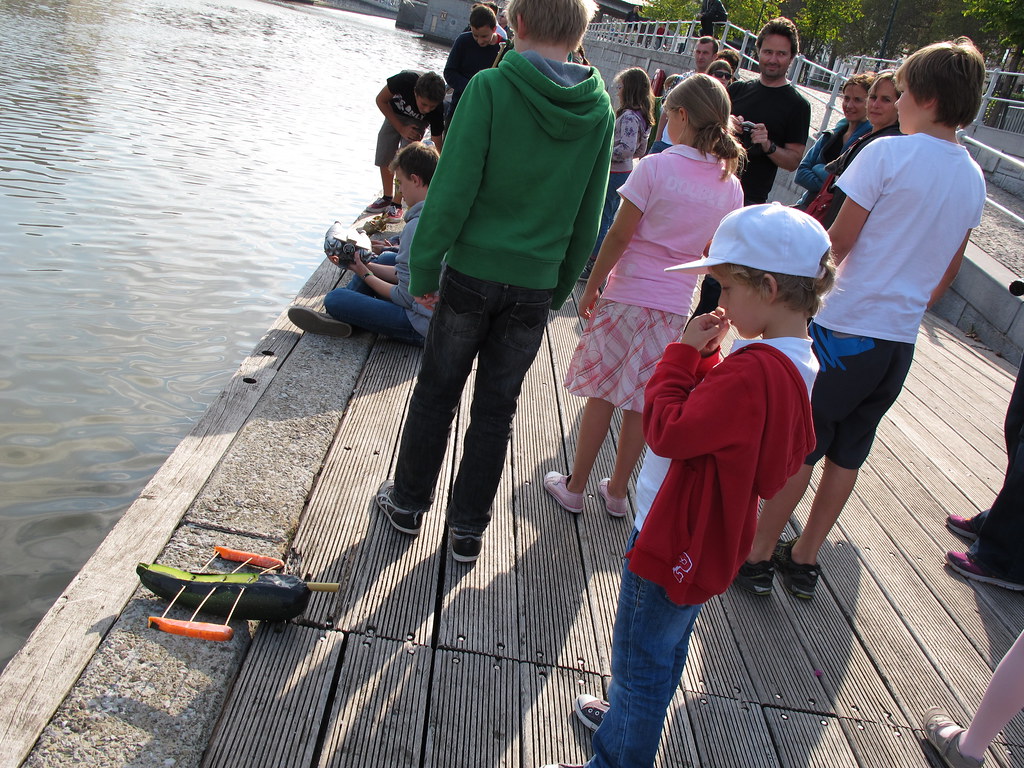 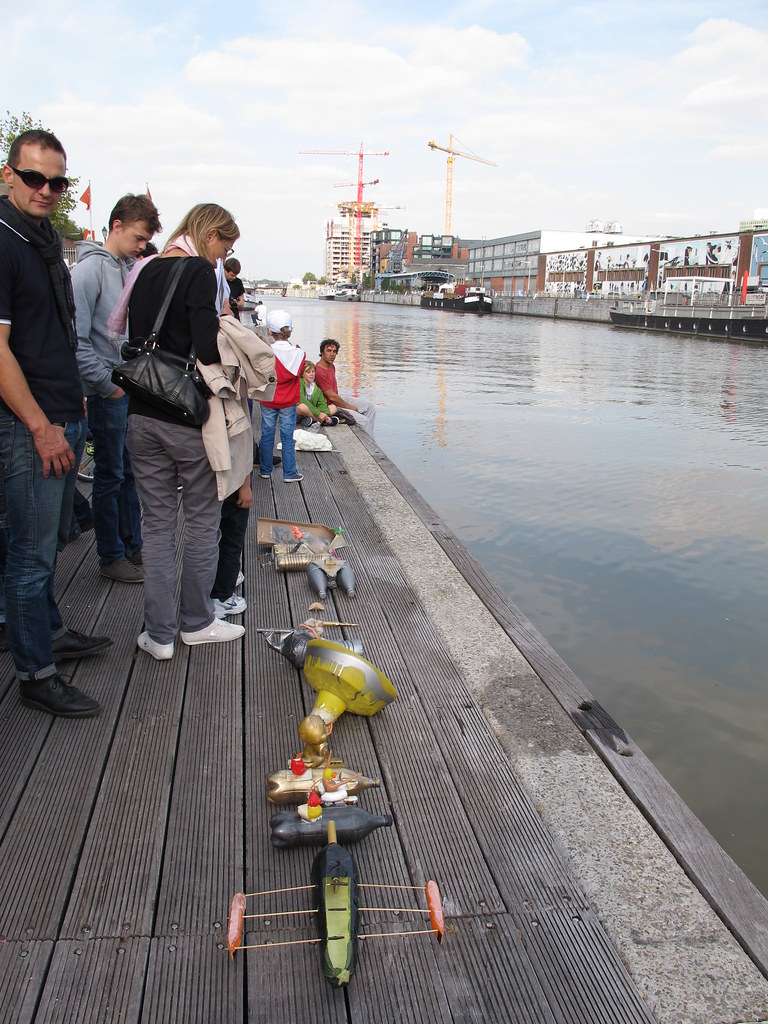 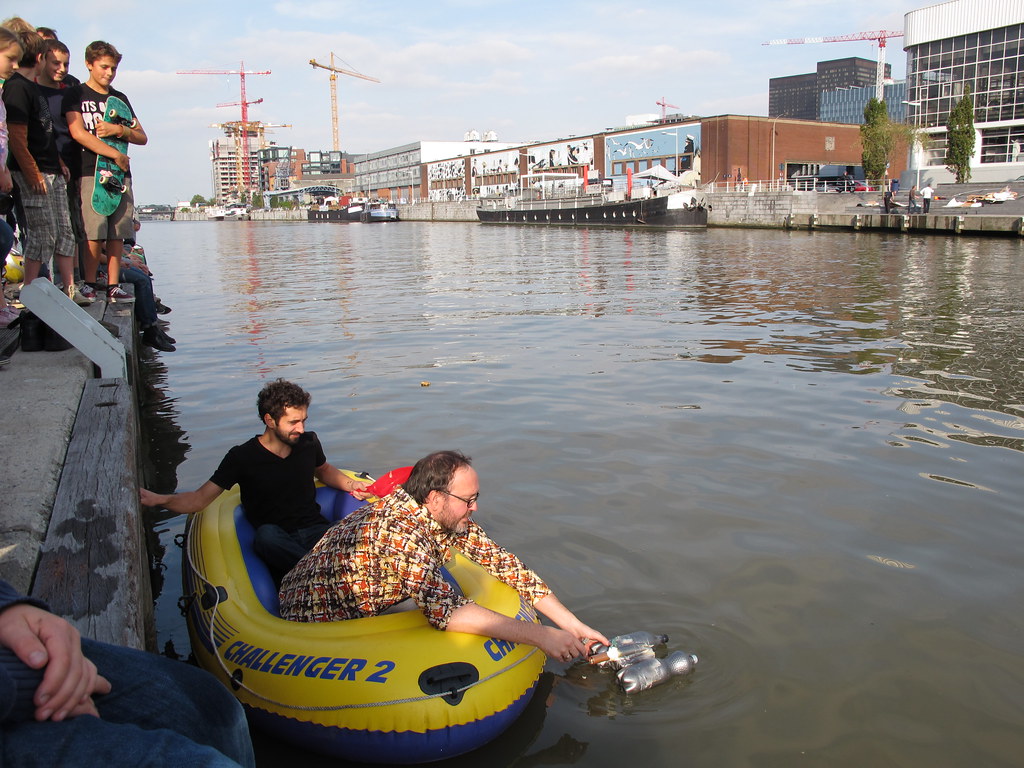 With boats at the ready we walked down to the Canal where the race was to take place. An inflatable dingy was lowered into the Canal and from here the boats were lighted and launched to (hopefully) make it across to the other side of the Canal. We had quite a crowd gathered on both banks. The boats were lined up along the shore. The tension was building. 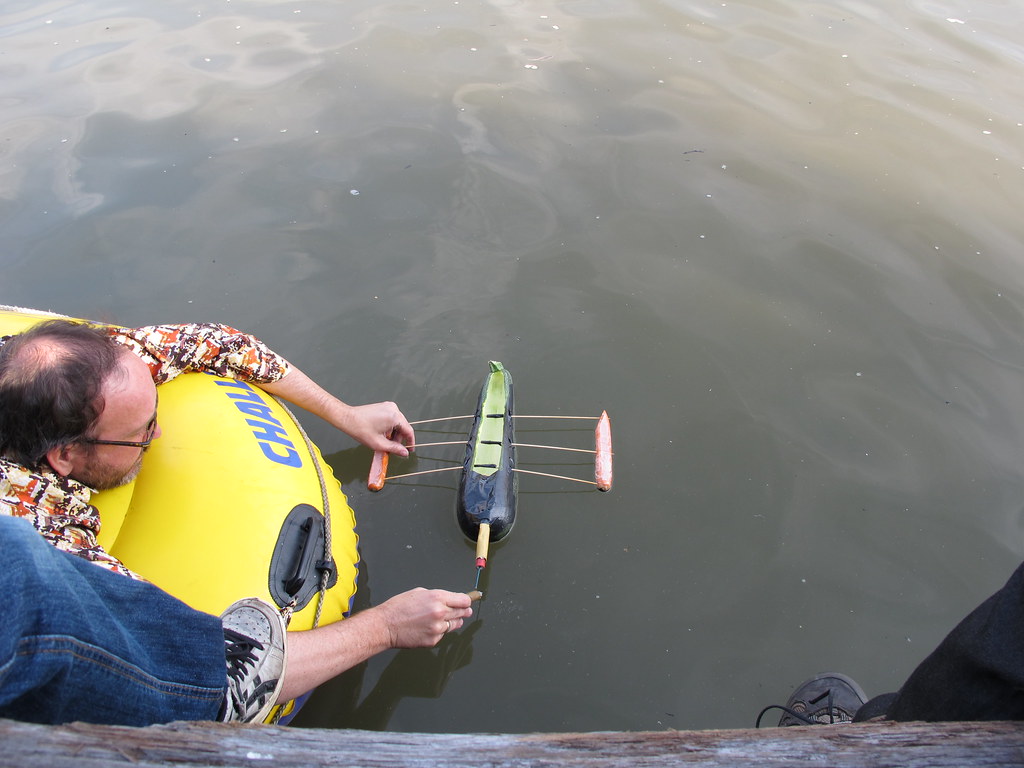 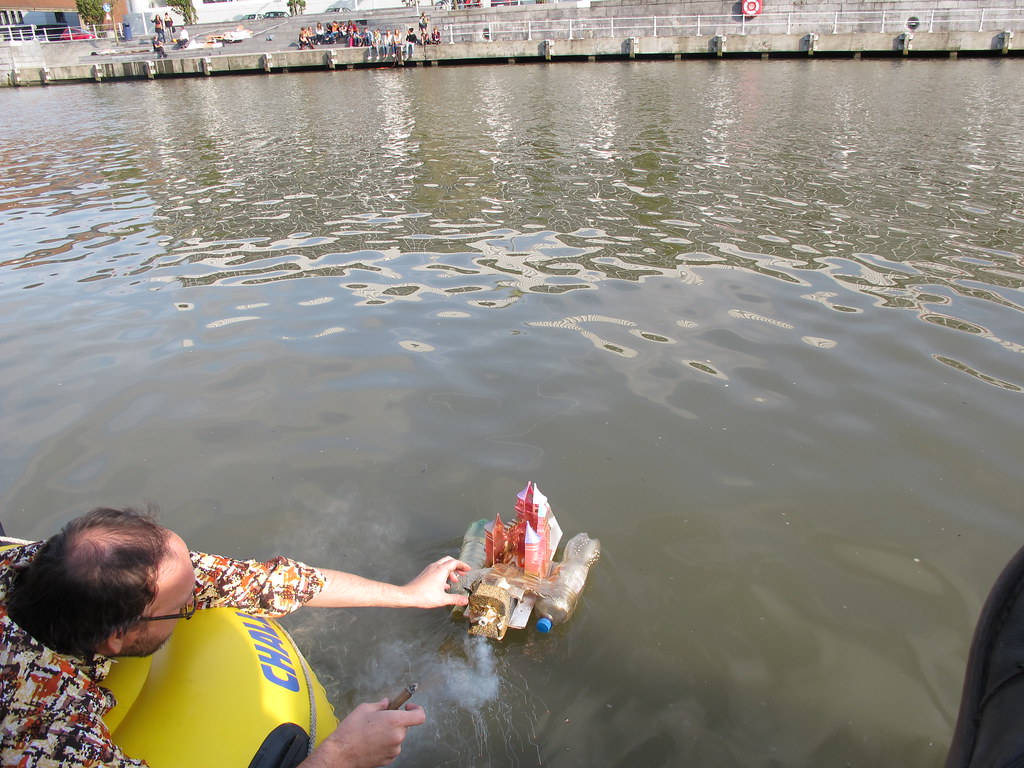 One by one, the ‘rocket’ was place in a pre-prepared cylinder in each vessel, the fuse was lit by cigar and the boat was launched. Some vessels didn’t even move, with the fuse sinking in the water and going out before lighting the rocket! It seems some people didn’t even test their boat in water once it was built to see if the fuse cylinder would stay above water… huge design flaw really. 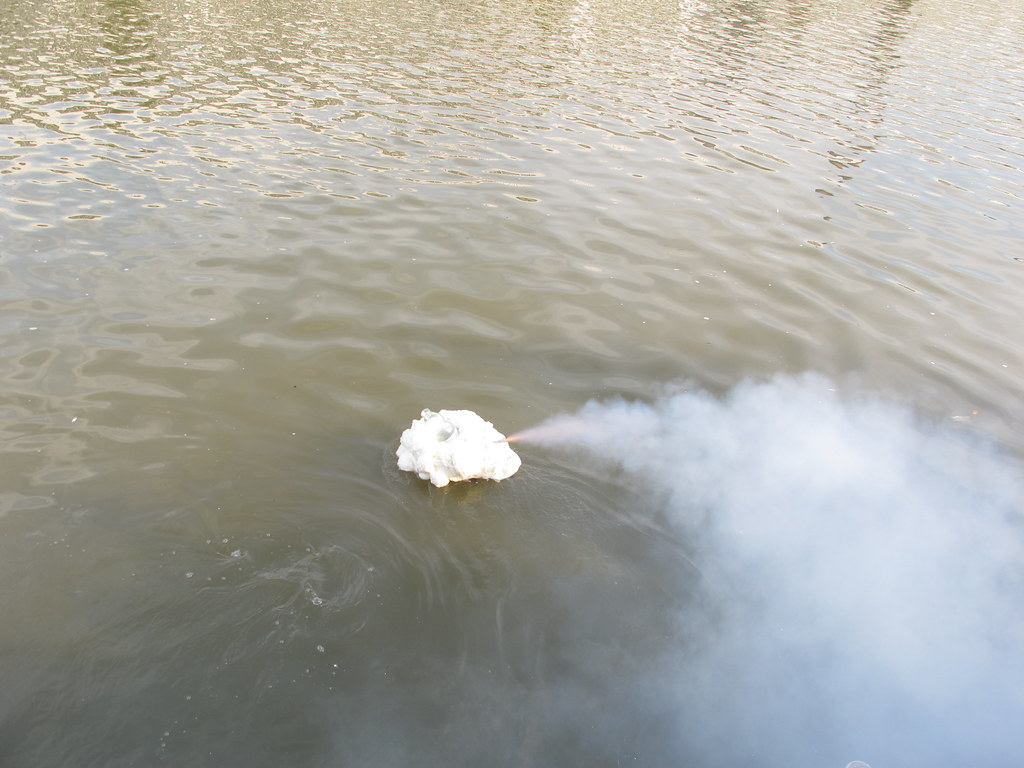 Anyway, there were a few good attempts and some brilliant failures. Cheers and screams went up in the crowd as each boat set off on its precarious journey. We had Barbie dolls driving plastic container bottles, a baguette (yes, just a baguette), a golden duck on skis, a foam creation resembling an iceberg, and then it was the courgette’s turn. 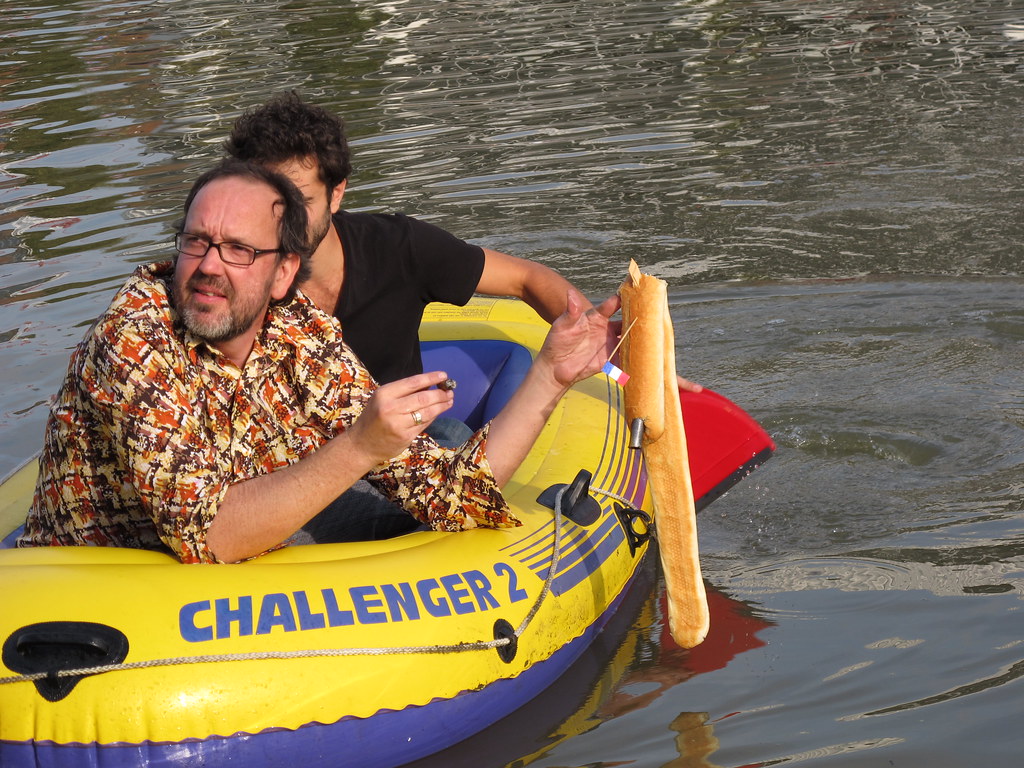 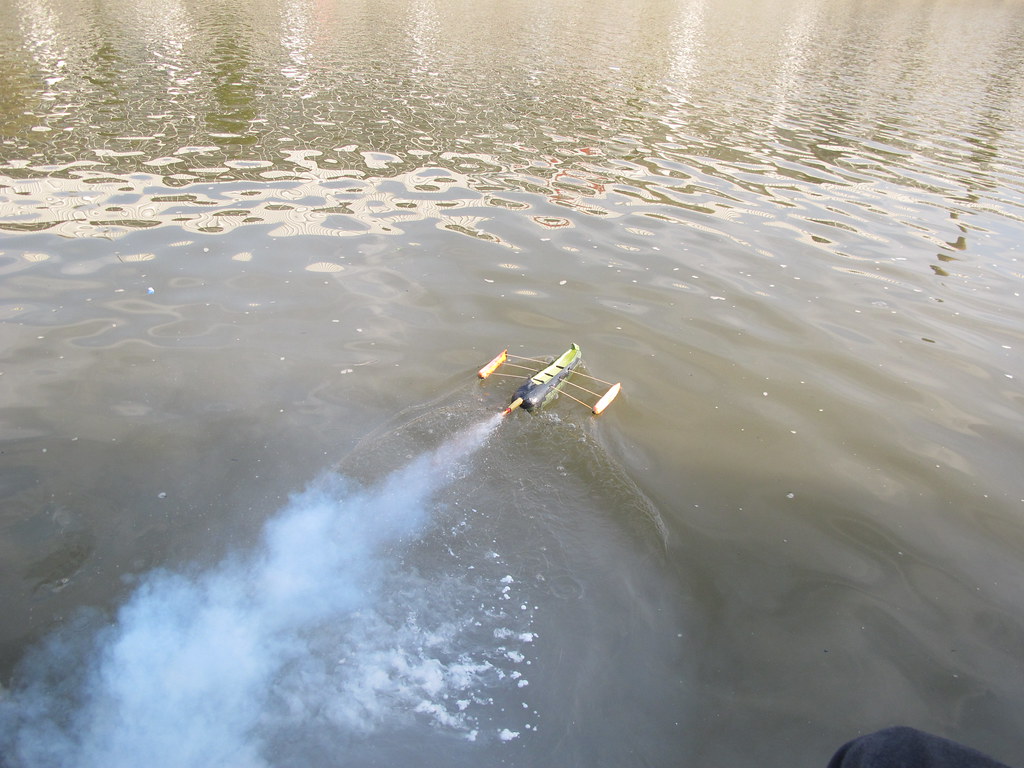 As it was lowered into the water, chants of ‘Courgette! Courgette!’ went up amongst the crowd. I was quite excited, but was also praying that it would float. The first fuse burnt out, so it had to be replaced and lit again (so much tension!). When it finally took off it actually went forward then curved around to the right (courtesy of a bent rudder)… BUT it went really far! I was very happy with its journey and was particularly impressed with the carrots acting to balance the boat but not hindering its capacity for speed and distance. 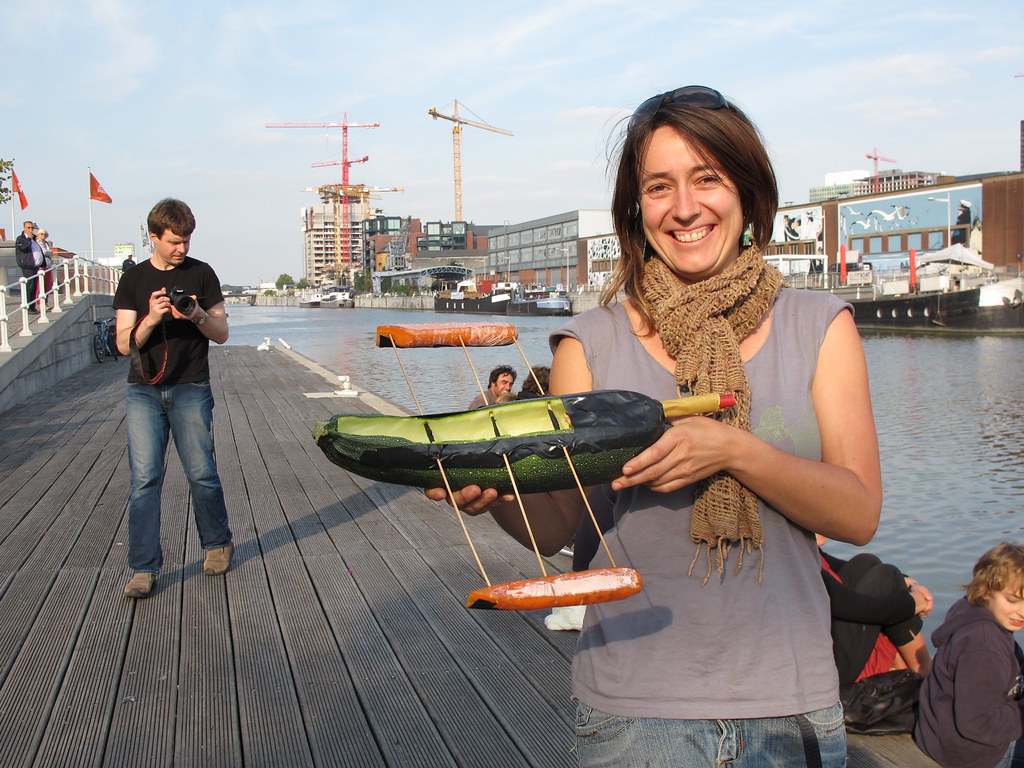 With all the boats raced it was time for prizes. I was lighting the BBQ when I heard my name read out. I won The Grand Prix Tournesol for Performance. I was very happy with my bag of sunflower seeds as a prize and we had a great BBQ on the canal afterwards.

The Rocket Boat Day was a really fun experience, and I hope that I have inspired people to think about using organic materials to build their boats in the future. The Rocket Boat is still sitting outside the entrance to Foam and as soon as it starts to smell, it can be chopped up and put into the worm farm. Here’s to the future of vegetables as race-able floating devices. Oh – and we ate the insides of the courgette too, a delicious soup!