The Feral MBA and its promise of radical contemporary alternatives, wild imaginaries and a means to sustaining meaningful work seems like the exact type of business syllabus I have often craved. (Feral MBA Inception participant)

The Feral MBA is assembling a radically different training course in business for artists and others. Its mission is to delve into the alien and protected realms of 'business' and 'economy' with a wild curriculum of ideas, practices, resources and experiments. It works with a fundamental redefinition of business as 'any productive activity that could bring us sustenance'. The pilot run of the programme, Feral MBA Inception, celebrated its first graduating group in Hobart (lutruwita/Tasmania, Australia) on March 1 2020.

In this experimental outing of the Feral MBA, we gathered for five weekends of workshops and discussions in which the prospect of business as a site for critical and creative enquiry was taken apart and grappled with by a committed group of attendees. Participating 'businesses' stretched the term from registered premises to individual livelihoods. Some appeared in the form of established endeavours, others as outlines or dreams.

Participants arrived with a swarm of concerns both pragmatic and existential: 'finding financial security / finding ways to articulate value beyond the financial / feeling uncomfortable charging for things / ditching the day job / working cooperatively and how that could function outside a communist utopia / doing business training and hating every minute of it'. 'Business' appeared as the hostile external environment, the inner ember being nurtured, and often a tangle of both.

At its heart, the Feral MBA is a training ground, a set of tools and an invitation to experiment. Its delicate and radical proposal is to stop minding our own businesses and open up these quandaries of survival and livelihood to mutual investigation.

In the process of the pilot we walked boldly onto freshly planted crops, sampled bootleg smoke-tainted fine wine from the regional bushfires and speculated on and with the project budget. We staged an experimental public panel on the thorny question of art and economy, and were joined by local, interstate and international business luminaries from Hobart's co-operative Tip Shop, East Gippsland artist residency programme FLOAT and Europe's FoAM. The programme itself moved between venues around Hobart, enabling us to consider our own practices in and amongst diverse configurations of business in action: a council-run arts space, a private museum, a start-up farm.

The prospect of doing business in ways that are lived and pragmatic but also negotiable, fantastical and experimental was embedded and performed throughout the course delivery, from resourcing to contracting and catering, right down to the project accounting. The production budget overflowed with deals considered and struck, including but not limited to: hosting and workshop spaces, a loaned bicycle, business coaching, boxing training, childcare manouvers, vegetable harvests, screen-printing, ride sharing, laser printing, cookie baking, spare room hospitality, airport drop-offs and door bitching. 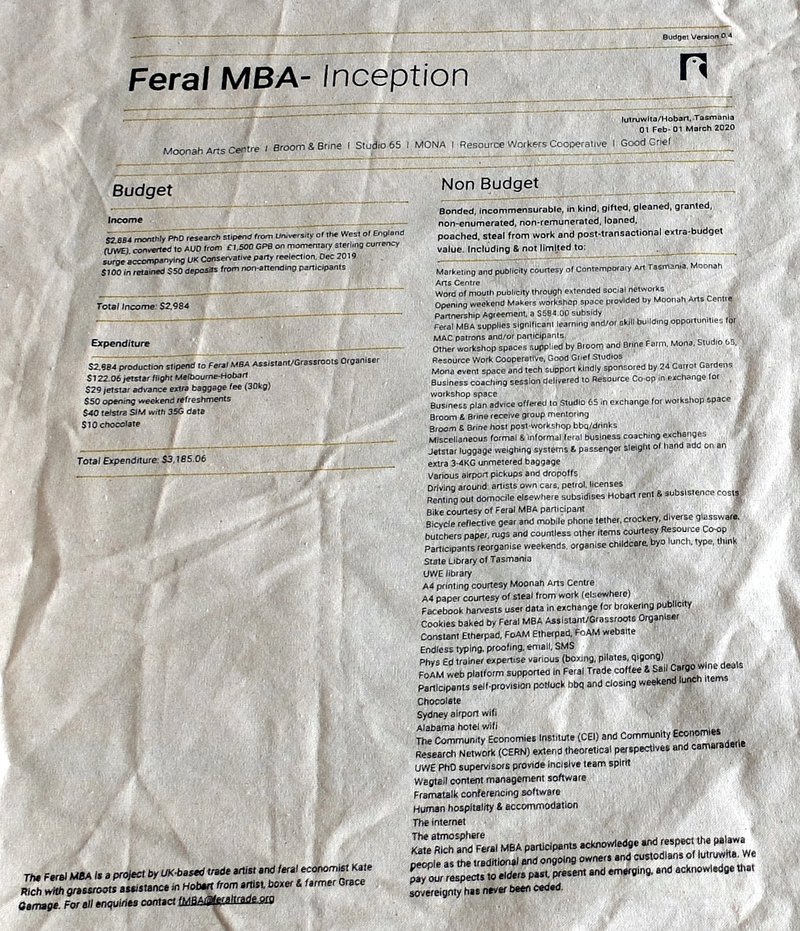 'The Feral MBA helped me disengage a lot from the structural and infrastructural focus of the farm and the business, which had been a big preoccupation. In fact I became so disengaged that one of the fields over there became full of weeds - I wasn't here so much - I just became really somewhere else for a while'.

As the first run of the Feral MBA curriculum, the pilot produced less in the way of firm conclusions but some glimmering shards of interest.

Artists (and others) may not be accustomed to applying imagination to business or equating economy with agency, experiments or fun. Mindful of these inhibitions - and the heavy weights of baggage that business and economy carry with them - the Feral MBA is also and primarily a process of training and untraining. Of breaking down 'business' as a foregone conclusion, its protocols and associations, the emotions and inertias that come with it and the practices and materials it assumes. This might mean rethinking business in ways that are not necessarily about getting 'ahead', getting things 'right', or doing 'good'. It involves getting under the skin of things - dropping the upbeat presentations of marketing, networking and the pitch for other moods and modes of relating.

We went from seeking out models that 'work' to taking up tools. The tools we trialled and tempered in the Feral MBA included intensive listening practices, in which the art of asking questions (rather than leaping to solutions) was considered and honed. We conducted (feral) business clinics, a forum blending elements of therapy, divination, DIY and exquisite corpse, as a way to open up questions of individual livelihood to the group imagination and resourcefulness. We applied unlikely implements of collectivity, chance and openness to business and ran experiments with money and resources, at different scales. We learnt from the feminist economists the possibility to redraw the 'economy' as not an inexorable outside force but a practice of surviving well together, where many of the skills and resources might already be within our reach.

We also dodged the bullet of 'best practice' to instead glean inspiration and a menagerie of survival strategies from the outliers and charismatic exceptions: the anarchist soft drink producers, volunteer-run cinemas, artist-run plastic recyclers, the community-supported sail cargo pioneers.

Where the Feral MBA veers away from familiar accounts of 'disruption' and 'innovation' in business is in taking these implements to business at its foundations: its motives, nature, standing, modes and ends, including such establishments as professionalism, productivity, scale and growth. It points to where artists - trained up in playing with form, and working with indeterminacy - might make a specific contribution to the towering task of rethinking business as usual. We asked What else could business success look like? and examined the glimmering potential of disclosure, hesitance, inconsistency, contradiction, non-striving and inefficiency as viable business foundations. Where innovation might be found not in the drive to new procedures and products but in recognising and mobilising the possibilities in what we are already doing.

'What would it be like if business was an experiment - rather than your business being a measure of your worth as a human being? '

'It's kind of like considering the business outside of how it's defined in terms of everything that goes to the tax department'.

It might go without saying that radically rethinking such consequential subjects as business and livelihood - simultaneously monolithic and at our throats - is more easily considered than done. What we also did in the pilot was venture together into the many blindspots, inertias, haunted spaces and zones of avoidance in business - of administration, pricing our work, considering failure, as well as a deep ambivalence as to what might be considered business 'success'. Approaching these many frontiers as matters in common turned out to be surprisingly generative. Although perhaps unsurprising, in the context of both art and business where competition - for funding, attention, opportunities, markets - remains such a powerful motif that staking our interdependence plays out as a radical, even transformational move.

We also discovered that time punched in as a scarce resource, beyond even money, surfacing across the programme in a persistent plague of busyness.

'Perhaps we should be speculating about what projects we could let go of, instead of the projects we want to do. It's all still based on a growth model, a capitalist kind of expansion. If we are talking more about scarcity, perhaps we could also have been workshopping things we could be doing less of, rather than future dreamings'.

'We can't opt out of the system but we can be the grit in the oyster. Be a model for how to look at the world in a different way'.

Then we exited the programme into a fiesta of wholesale business disruption. While memories of the summer's catastrophic bushfires were seared across proceedings, the virus barely figured in our conversations. One day after its closing, the first Covid-19 case was reported in Tasmania, and within a week, we were catapulted into a world-scale experiment in which our daily routines, short-term plans, jobs, business prospects and future imaginings of what is possible or plausible in business terms had been fundamentally redrawn. The 'real world' and its inevitabilities of mortgage payments, daily commutes, projects, events and busyness shaken to the core by the spikes and anomalies of 'exceptional' measures.

Looking back at the Feral MBA Inception across the Covid line, the flash-dissolution of economic certainties feels like uncanny timing. Not to adopt Bruno Latour's words 'I'm sorry to have been so right'', but to venture instead the prefigurative value of the Feral MBA as a training module for this unknown future space. What it might contribute to the deadly stakes of change being played out in our wider environments (social, financial, ecological and epidemological) is a place to deliberate with business as a space of agency, encounter others, make deals and alliances and cultivate the art of doing business in & for uncertainty.

In its long term vision, the Feral MBA imagines itself a symbiont or satellite to the critical business school, the feminist economics campus and the FoAM network itself, where open-ended experiments with business could be investigated and applied. In the nearer future, trials of the curriculum are in speculative planning for Plymouth, UK and Ljubljana, Slovenia, with further iterations open to invitation. 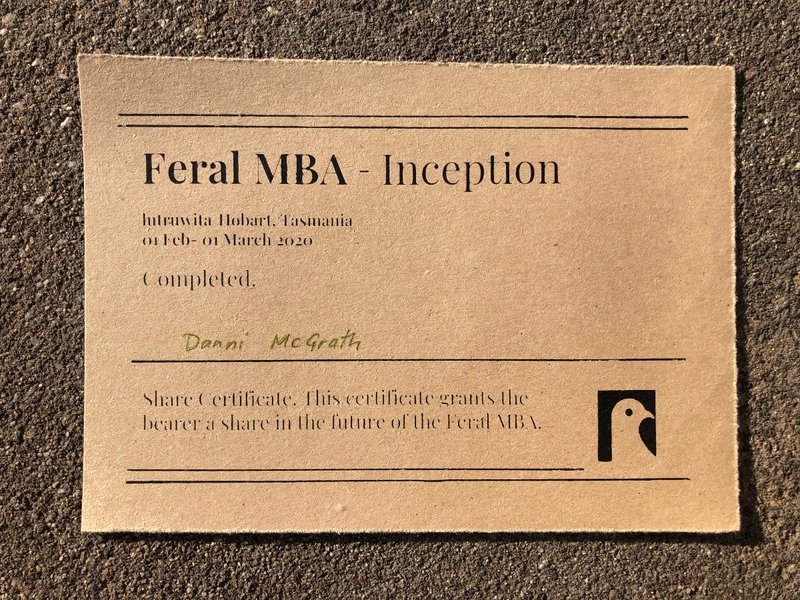