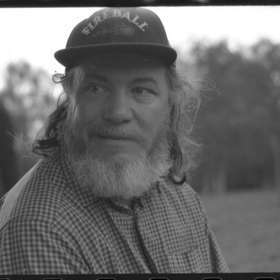 Coming from a village where it was impossible to evade other people's attentions, Chiz has worked with thousands of people and more than people on the hunch that ideas, instruments, feelings and non core processes are vital forms of relationship fostering. His most consistent work in the last 20 years is as part of the workforce at the Cube Cinema, Bristol. Over this period, the self styled Microplex has encountered numerous organised and random groups formed around the lure of possible social, artistic and environmental engagement points. Together they have searched for time, space and support to craft events and art. This work has required a constant balancing of all kinds of personalities and practises often at a grassroots level, with global perspecives and in rapid and changeable conditions. His work has grounding through periods spent in social clubs, warehouses, retail, international A&R, camps, colleges, discos and gardens. In Bristol he partnered up to construct temporary projects and gangs and long-form films and art-books such as Scrapbook, The Film That Bought The Cinema, Cables & Cameras, OFF, Water Salad On Monday, KIN, Venn Festival, Blackout Arts, Barn Nova, DoZy, Super Group Extreme, Light Years and other things. For 10 years Chiz and co-partners at Qu Junktions engaged in novel and serious methods/styles to break music out of tired categorisation and practises. Qu is lithe agency for musicians/artists working independently from industry norms and requiring support and development. Current work includes quickening or slowing people and organisations down, being an mentor at Borderlands, coaching at Packers FC – a community football club, blurred arts and production disco-ordination, and co-developing an annual RADMIN camp exploring 'what artists can do for business'.