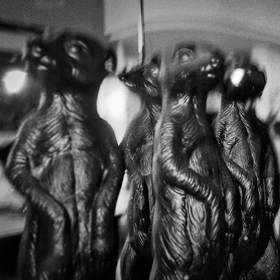 A thinly disguised extraterrestrial, Alkan is an aperiodic meerkat-in-residence at FoAM Brussels, and fervent Anarcho-Dandyist sympathiser. At age 13 he initiated his first (failed) apocalyptic death cult, which managed to attract one other member at the height of its popularity. Struggling to make sense of an alien species, Alkan studied anthropology for several years at university. Career highlights include chaperoning psychologically deranged cats in a feline correctional institution, washing cheese in a forced-labour, biodynamic kholkhoz, and schlepping infinite washing machines across the dark metropolis.

In Conversation with Stevie Wishart

Stevie Wishart was FoAM’s “composer in transience” at the Brussels studio for most of 2015. Her residency emerged as a natural consequence of a long involvement with FoAM spanning several years and numerous projects, including most recently Wheel & Time(less), Candlemas Concerto, FutureFest, Smoke & Vapour, and Inner Garden. When I had the opportunity to talk with her in the spring of 2015 she was deeply immersed in a large composition that would be performed by the Orchestra of the Age of Enlightenment in May. Our discussions therefore gravitated around the particular challenges and musical innovations she was imminently preoccupied with at the time – which made for some fascinating comparisons and contrasts between these and the very different contexts and approaches entailed in working on a musical project at FoAM.

The core team of FoAM bxl (and the organisation as a whole) are FoAM's transients during 2016.

After a few hours the majority of the crew seems to be arriving (mind lag) The first casualty happened, although not too serious. Boo has been violated by rats. The doctor keeps him sedated while the agave wound heals. In the mean time, the craftsmen are building Boo-sized rat traps that he's wearing while hibernating (sun has disappeared, so his energy levels are low. The flotilla needs a kitchen extension (temporary)., in order to accommodate the vast numbers of cooks interested in contributing to the feast. http://vimeo.com/55952966

This is the third blog post of the Time's Up/Austria trilogy, and concludes the series. (Sort of.) It narrates a workshopped story of building a physical scenario – or rather, it tells the story of the process of physically narrating a scenario within a workshop. Or the other way round. In any case, whatever happened, it felt a lot like a (lucid – and ludic) dream.